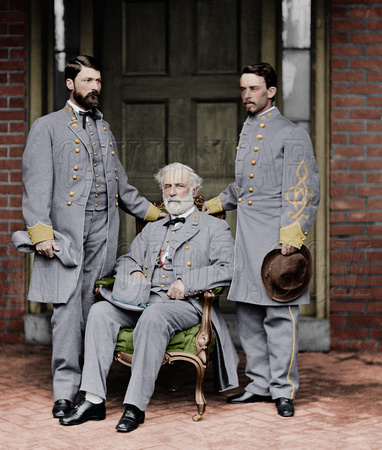 Two people close to Robert E. Lee during the Civil War were his son Custis (left) and his aide Walter Taylor (right). Custis was named “George Washington Custis Lee” to honor his mother’s side of the family and her relationship to Martha (Custis) Washington. He followed in his father’s footsteps and entered West Point at the age of 17. His father became superintendent of West Point while Custis was in his third year and he graduated first in his class the following year.

Custis followed his father into the Corps of Engineers and between 1854 and 1861 served in various positions in California, Georgia and Florida. By the start of the war, he was a First Lieutenant serving in Washington D.C. Two weeks after his father resigned, he also resigned and joined the Virginia militia. Given the rank of Captain, he was assigned duties fortifying the area around Richmond. In August of 1861, he was appointed as aide-de-camp to Jefferson Davis and promoted to Colonel. He spent the next three years traveling to assess the condition of the Southern Army for Davis.

In June of 1863, Custis was promoted to Brigadier General. While he longed for field command, he was discouraged by Jefferson Davis, but encouraged by his father. His father did give him the opportunity to command troops during Gettysburg. He was promoted to Major General while commanding troops during the defenses of Richmond in 1864. He was again commanding troops shortly before the end of the war and was captured three days before his father surrendered. After the war, Custis again followed his father by succeeding him as president of Washington and Lee University, serving between 1871-1897. During this period, he successfully sued the United States for confiscation of the Arlington Family estate during the war. The following year he sold the estate to the Federal Government for $150,000, allowing it to remain as Arlington Cemetery. Custis Lee died in 1913, at the age of 80.

Walter Taylor had graduated from Virginia Military Institute and had become a Banker prior to the war. He joined the Confederate Army in 1861 and was assigned to the staff of Robert E. Lee. The following year, when Lee became commander of the Army of Northern Virginia, Taylor became the assistant adjutant general. Serving as Lee's right hand - he would write dispatches, carry messages for the General and performed reconnaissance operations. At the age of 25, in 1863, he was promoted to Lieutenant Colonel. By this point, he was the gate keeper for Lee and would allow or deny visitors to the General.

Taylor was given permission to marry just prior to the end of the war. He was married in Richmond just after midnight on the morning it fell to Federal troops. Evacuating with his wife to Southern lines, he stayed there until after Lee’s surrender. He returned to Richmond, a week after the surrender, on the day this picture was taken.