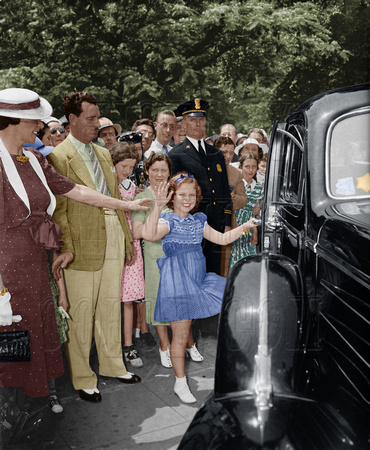 Like many American families, during June of 1938, Shirley Temple and her parents went on a cross country car trip. Unlike other families, a second car trailed them with her body guard, studio publicists, 2,000 still photographs and 10,000 autograph cards.

In 1938, Shirley Temple was the top box-office draw for the fourth year in a row. Her signature hair style, fifty-six unvarying pin curls, was created by her mother as a method “to thwart fizziness induced by seaside humidity.”

The famous from all walks of life would pop in to see Temple at the movie studio. It was now her turn to pay calls.

On June 24th, in Washington D. C., the family went to visit at the White House. Eleanor Roosevelt had called on Temple at the movie studio, it was now time to meet Franklin Delano Roosevelt. In 1934, after the release of Temple's flick "Baby Take a Bow", FDR said, “When the spirit of the people is lower than at any other time during this Depression, it is a splendid thing that for just 15 cents, an American can go to a movie and look at the smiling face of a baby and forget his troubles.”

Oddly enough, as she waited outside of the Oval Office, FDR was signing the Black-Connery Bill, which eliminated American child labor. Happily, for Temple's employers, 20th Century Fox, an amendment was added during congressional debate to exempt child performers in movies. Otherwise FDR would have ended Shirley Temple's acting career at the stroke of a pen.

The pair broke the ice by talking about fishing. As Temple would later describe:

“Why aren’t you smiling? FDR suddenly inquired. “I thought you were famous for your smile.”

"The reason is, I lost a tooth. See?" I pulled back the upper lip and went on to describe how the tooth had fallen out during a bite of sandwich. He threw his big head up and back and broke into loud laughter.

For me it was no laughing matter. The tooth had been left on my hotel bureau, later to go under my pillow for a “tooth fairy” reward. During my absence at the FBI maybe someone had snitched it for a souvenir.

Before Temple left, FDR autographed her book above his wife’s signature. He wrote, “For Shirley from her old friend.”

Outside of the Oval office the family was surprised to run in to another of Temple's visitors at the studio, Treasury Secretary Henry Morgenthau. As they were setting up an appointment for lunch, FDR called out, "Come on, Henry, there is always some woman holding you up. This is an important conference."

"Yes. Mr. President, but so is this one, Morgenthau called back, "I'm trying to find out what this lady wants for her lunch."

During the lunch, Morgenthau related that, "The President says you're a diplomat too." Perhaps FDR was foreseeing Temple's future career as the ambassador to Ghana and Czechoslovakia along with being the first woman to serve as U.S. Chief of Protocol.
© History In Full Color
User Agreement
Cancel
Continue