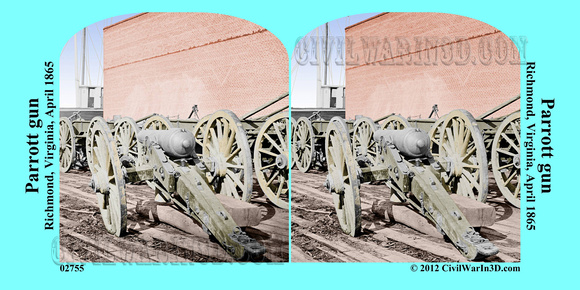 The Parrott gun was created in 1860 by Robert Parker Parrott. Both cast and wrought iron was used to manufacture the weapon. The cast iron made an accurate but brittle gun. Parrott’s innovation applied a reinforcing band on the breech red-hot while pouring water down the muzzle. The gun was cheap and easy to make but had a poor reputation for safety. During battles when the gun would burst, artillerists would break off the jagged bits and resume firing.


Both sides extensively used the Parrott gun during the Civil War. This image was taken about the time Richmond fell into Union hands. The Union army gathered the guns and many were melted down. Used both by the Army and Navy several of the guns still exist today, but only on display. Attempts to eliminate the gun, due to poor safety, began during the war and following mishaps at West Point, the gun was discontinued as an active weapon in 1889.


The gun tubes made by Parrott's foundry are identifiable by the letters WPF (West Point Foundry) found on the gun tube, along with the initials RPP for Robert P. Parrott. The guns ranged in size from a 2.9” diameter and 73 inches in length(shown here), firing a 10 lb. shell nearly three miles to a whopping 10” diameter and 156 inches in length, firing a 300 lb. shell more than five miles.
© History In Full Color
User Agreement
Cancel
Continue