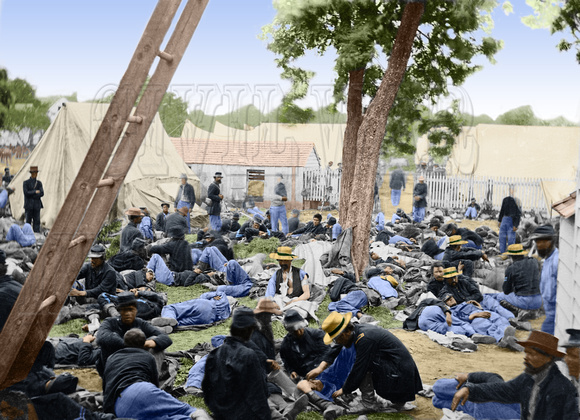 The “Fighting 69th” was originally known as the “Irish Brigade”. It was a militia unit based in New York City, primarily consisting of Irish immigrants and their descendants. While the 69th, originated in 1851, subsequent mergers of Army units push the founding back as far as 1799. During the Civil War, the unit participated in many major battles from the first day of the war to the last.

After First Bull Run (First Manassas), the regiment was part of the rear guard as the Union Army retreated to Washington. Soon the 69th became the lead unit of several other Irish regiments. As a brigade, it swelled to 3,000 in size. During the battle of Antietam, the unit suffered 60% casualties and even had a worse casualty count during the battle of Fredericksburg. While engaged with the Louisiana Tigers (a Confederate Irish regiment) at Fredericksburg, Robert E. Lee was told that he was facing the New York 69th and proclaimed, “Ah yes, That Fighting Sixty-Ninth”. Since that time the unit has carried the name.

Following the Fredericksburg battle, only 300 soldiers survived and the unit almost ceased to exist. The commander resigned and a new commander replaced him. During Gettysburg, the unit was so devastated that is ceased to function as a unit and was disbanded in 1864. Within a few months it was reformed with new Irish volunteers and served out the rest of the war.

The list of battles that the 69th participated in is remarkable - Bull Run, Peninsula Campaign, Antietam, Fredericksburg, Chancellorsville, Gettysburg, Wilderness, Spotsylvania, Cold Harbor, Petersburg and Appomattox. Following the war, all the other units of the “Irish Brigade” ceased to exist and only the 69th remained as part of the New York National Guard. The unit continues on, serving in both World Wars as well as operations in Iraq and Afghanistan after the attacks on 9/11.
© History In Full Color
User Agreement
Cancel
Continue