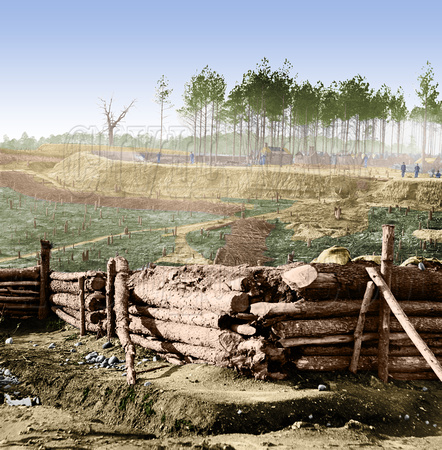 Bermuda Hundred was the first town incorporated in Virginia in 1613. It was founded just six years after Jamestown. Located near present day City Point, by the time of the Civil War, it served as a port city for over two hundred years. The Bermuda Hundred Campaign was actually a series of battles lasting most of the month of May, 1864.


General Benjamin Butler led the Union army against General Beauregard. At first, Butler was effective against Beauregard but ultimately chose a defensive position for his army. This allowed him to protect the land from Beauregard. It also made it impossible for Butler to attack. In what was to be one of the first foreshadows of World War I, each side formed defensive trench lines that kept the enemy at bay but resulted in little territory gains.


In the end, the campaign was considered a failure for Butler. Beauregard managed to keep the Union army pinned at Bermuda Hundred with a limited number of troops. The remaining portion, Beauregard was able to send, to assist Lee, struggling with Grant.


In his memoirs Grant wrote about a conversation with his Chief Engineer regarding the campaign:


“He said the general occupied a place between the James and Appomattox rivers which was of great strength, and where with an inferior force he could hold it for an indefinite length of time against a superior; but that he could do nothing offensively. I then asked him why Butler could not move out from his lines and push across the Richmond and Petersburg Railroad to the rear and on the south side of Richmond. He replied that it was impracticable, because the enemy had substantially the same line across the neck of land that General Butler had. He then took out his pencil and drew a sketch of the locality, remarking that the position was like a bottle and that Butler’s line of entrenchments cross the neck represented the cork; that the enemy had built and equally strong line immediately in front of him across the neck; and it was therefore as if Butler was in a bottle. He was perfectly safe against an attack; but, as Barnard expressed it, the enemy had corked the bottle and with a small force could hold the cork in its place.”
© History In Full Color
User Agreement
Cancel
Continue