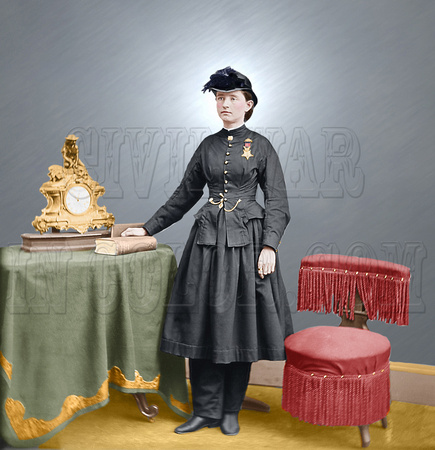 Dr. Walker holds an interesting and unique place in American history. She the only woman in the entire existence of the Medal of Honor to be so honored. This was not always the case and her story tells some interesting adventures in history.


Born in 1832 she became one of the country’s first female physicians when she graduated Syracuse Medical College (now Upstate Medical University) in 1855. She setup practice in Rome, New York with her husband, whom she had met in college. An early feminist she wore pants and a dress coat to her wedding and chose to keep her maiden name. Her joint practice and her marriage both failed.
Twenty Nine at the start of the Civil War she volunteered, but was only allowed to serve as a nurse. After First Bull Run (First Manassas) she worked as an unpaid surgeon and got some recognition. It still took until September of 1863 before she finally received a contract as an official civilian surgeon.


Appointed Assistant Surgeon for the 52nd Ohio Infantry, crossing lines to treat civilians wounded in battle. In April of 1864 she was captured and held as a spy, even though she had just assisted a confederate doctor with an amputation. She remained a POW until August and then served during the Battle of Atlanta and later managing a female prison in Kentucky and an orphanage in Tennessee.


In November of 1865 President Johnson, on the recommendation of Generals Sherman and Thomas awarded her the Medal of Honor. Her citation read in part:


Whereas it appears from official reports that Dr. Mary E. Walker, a graduate of medicine, "has rendered valuable service to the Government, and her efforts have been earnest and untiring in a variety of ways," … It is ordered, That a testimonial thereof shall be hereby made and given to the said Dr. Mary E. Walker, and that the usual medal of honor for meritorious services be given her.


Following the war she took up women’s rights issues including the right to vote, temperance and dress reform for women. Working with Susan B. Anthony and others she became one of the leaders in the movement and argued that women already had the right to vote. When Anthony and others decided to work toward a constitutional amendment Dr. Walker fell out of favor and was ignored. In addition, her lifelong habit of wearing men’s clothes, including top hat, inflamed other members and those they tried to persuade. On several occasions she was arrested on the charge of trying to impersonate a man.


During review of Medal Of Honor recipients the criteria was updated and Dr. Walker along with more than 900 others had their medals rescinded. All, including Dr. Walker were allowed to keep the medal, but no official recognition. Dr. Walker died in 1919, still wearing her medal. President Carter restored her to the honor role in 1977.
© History In Full Color
User Agreement
Cancel
Continue