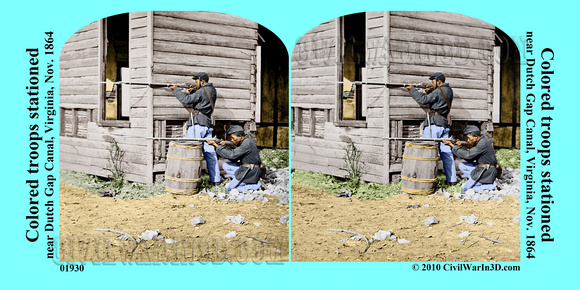 Pictured here is a picket station manned by African-Americans of the USCT posing with Springfield Armory Model 1861 rifle-muskets. Enlistees in the USCT were largely former slaves recruited in Union occupied areas. Many of the men stationed at Dutch Gap came from the Freedmen's Colony of Roanoke Island, NC.

By 1864, the winding James River in Virginia was dominated by a series of Confederate batteries. To ease Union navigation, a proposal was made to build a canal to bypass a bend in the river. The 36th USCT was stationed at Dutch Gap to both dig the canal and protect workers from Confederate fire. The unit fought in six engagements and ended the war in the trenches at Petersburg and Richmond. The 36th USCT was one of the first federal units to enter Richmond on April 3, 1865.
© History In Full Color
User Agreement
Cancel
Continue