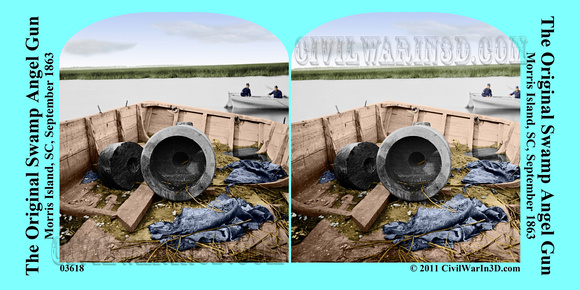 What became known in the South as “Charleston’s Nemesis” and in the North as the “Swamp Angel” was in reality a very large caliber Parrot rifle. The weapon was brought to Charleston in August of 1863. This maneuver was an attempt to force Ft. Sumter to surrender by firing on Charleston, some 4 miles away from Morris Island. General Gillmore ordered a massive battery built to support the gun. It was constructed using more than 13,000 sandbags, 16,000 pounds of sand and miles of timber and planking. The entire structure was ready by August 17th, to receive a 8 in. Parrot gun capable of firing a 200 lb projectile 8,000 yards (4 ½ miles) using 16 lbs of powder. A typical 4 inch Parrot gun, by comparison, could fire a 29 lb shell 6,700 yards with just over 3 lbs of powder.

Christened the “Swamp Angel” upon arrival, the Union forces hoped that the massive damage and destruction to be caused by the weapon, would force the fort to surrender and ultimately capture Charleston.

Unfortunately, Parrot Guns were notorious for causing damage both to their targets and their gun crew. By 1862, a year before the “Swamp Angel” was commissioned, some were calling for removal of the weapon from the inventory. While the Parrot Gun was accurate, the wrought iron body caused it to be brittle and prone to exploding, resulting in damage to the gun and crew. As a preventive measure, a large band, that became the source of the distinctive sing of Parrot guns, was placed near the breach as a safety measure.

The “Swamp Angel” began it’s shelling at 1:30 AM, on August 22nd, by taking aim at St. Michael’s Church in Charleston. The gun continued to fire a total of 15 rounds that day and on the 23rd, an additional 20 rounds were shot at Charleston. On shot 36, the “Swamp Angel” demonstrated the weaknesses of Parrot Guns, when the breech was blown off. With minimal damage, neither Fort Sumter nor Charleston surrendered. In this image you can see the breech to the left and the interior of the cannon on the right. The barrel extends away toward the rowboat in the distance and is not visible in this angle.

After a number of mishaps, Parrot Guns were finally retired from the U.S. arsenal in 1889. The “Swamp Angel” was sold for scrap and purchased by the citizens of Trenton, New Jersey. It can be seen today in Cadwallader Park, without however, it’s distinctive band. Herman Melville (author of “Moby Dick”) made the gun famous in his poem “The Swamp Angel”.
© History In Full Color
User Agreement
Cancel
Continue