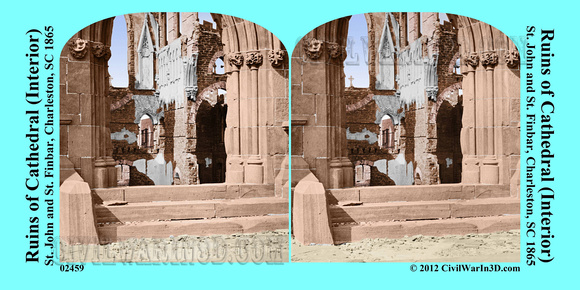 The Cathedral of Saint John and Saint Finbar in Charleston, South Carolina existed for less than 10 years. Groundbreaking took place in 1850 and the Cathedral was consecrated in 1854. It served the Catholic community until it was destroyed by the fire that ravaged much of Charleston on December 11th, 1861.


Following the war, nearly thirty years passed before rebuilding of the structure could begin. In 1890, twenty nine years after it was destroyed, the corner stone of the new church, The Cathedral of St. John the Baptist was laid. Designed by the same architect as the first church, it was seventeen more years before the church finally opened. Due to a lack of funds, the spire that was planned for the top was not completed. It would take until 2010, nearly 149 years after it predecessor was destroyed before the new church was finally complete.
© History In Full Color
User Agreement
Cancel
Continue