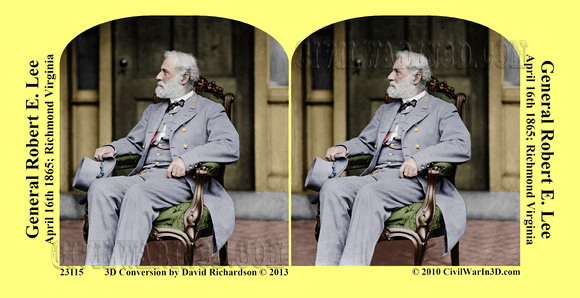 On Palm Sunday, April 9th, Robert E. Lee knew that he could not continue and surrendered to General Grant. Easter was one week away and the war was over. The North had captured Fort Sumter, where the war started, 46 days before. Eleven days later on March 5th, Lincoln was sworn in for his second term. Less than a month later, on April 2nd, Lee could no longer hold onto Richmond and informed Jefferson Davis that the city must be abandoned and that he will attempt to join forces with General Johnston.


The next day, Monday, April 3rd, both Petersburg and Richmond fall into Union hands. On Tuesday, April 4th, Lincoln arrives in Richmond to tour the city and sits at Jefferson Davis' desk in the Southern White House. By Sunday the 9th, Lee surrenders three days short of the fourth anniversary of the start (April 12th) of the war. To commemorate the event of recapture of Fort Sumter and the end of the war, the North has planned a celebration. They have brought Major (now General) Anderson out of retirement and given him the honor of raising the same flag he had lowered four years before.


The celebration is scheduled for April 14th, Good Friday, and the President is invited. Having visited Richmond just the week before, Lincoln decides to stay in Washington and attend a play with General Grant as his guest. Grant declined, but Mary Lincoln insisted that they still attend. It was a celebration after all. The South had just surrendered five days before. Lincoln began his second term 40 days earlier and it was Good Friday. Everyone (in the North) was looking forward to celebrating on Easter.


By the following morning, Lincoln was dead and Matthew Brady had arrived in Richmond to photograph Robert E. Lee. On April 16th, Easter Sunday, the day after Lincoln died, Brady convinced Lee, his son and Lee’s aide, Walter Taylor, to don their uniforms one more time and take a series of six pictures on the back porch of Lee’s home. Seven days before Lee had been in command of one of the largest armies in the world. Four days before was the fourth anniversary of the start of the war. Two days before Lincoln had decided to attend the theatre, rather than the flag raising at Fort Sumter. The day before Lincoln had died. Now Brady was asking Lee to put on his uniform and pose for history.


As Lee sat for this photo, he gazed to his right. What was he thinking? Was it about what had transpired the week before at Appomattox Court House? Or was it about the assassination of Lincoln two days before and his death the day after? What convinced him to put on his uniform and pose as a Confederate General for the camera one last time? Of course there are no answers. He had lost his country, his home of Arlington and the war for which he gave so much. Perhaps he was thinking about the future.