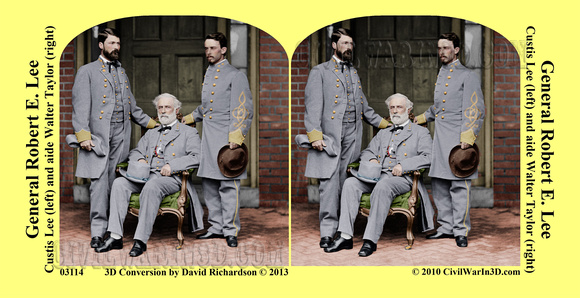 Two people close to Robert E. Lee during the Civil War were his son Custis (left) and his aide Walter Taylor (right). Custis was named “George Washington Custis Lee” to honor his mother’s side of the family and her relationship to Martha (Custis) Washington. He followed in his father’s footsteps and entered West Point at the age of 17. His father became superintendent of West Point while Custis was in his third year and he graduated first in his class the following year.

Following the war he returned to banking and was elected to the Virginia Assembly as a State Senator. Due to his position on Lee’s staff, he was often called on to resolve disputes about conflicting accounts of the war. He was the first person given access to the National Archives to write his 1877 book, “Four Years with General Lee”. The book, due to its writing style that read like a military report, did not sell well. In 1906 he wrote a second book, “Robert E. Lee, His Campaign in Virginia, 1861-1865”, which suffered from some of the previous writing style of military statistics. This time, between the statistics, it had been crafted into more of a novel and became a best seller. He died in 1916 at the age of 77.