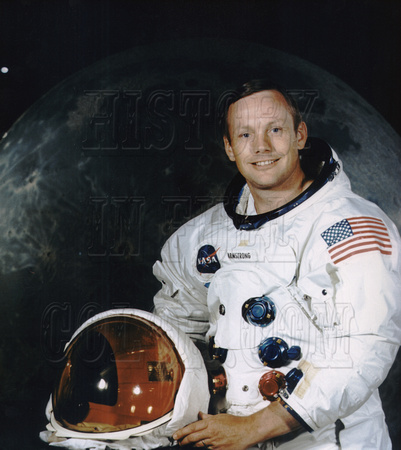 Neil Armstrong, donned in his space suit, poses for his official Apollo 11 portrait.

Armstrong began his flight career as a naval aviator. He flew 78 combat missions during the Korean War. Armstrong joined the NASA predecessor, NACA (National Advisory Committee for Aeronautics), as a research pilot at the Lewis Laboratory in Cleveland and later transferred to the NACA High Speed Flight Station at Edwards AFB, California.

He was a project pilot on many pioneering high speed aircraft, including the 4,000 mph X-15.

He has flown over 200 different models of aircraft, including jets, rockets, helicopters, and gliders.

In 1962, Armstrong was transferred to astronaut status. He served as command pilot for the Gemini 8 mission, launched March 16, 1966, and performed the first successful docking of two vehicles in space.

Armstrong subsequently held the position of Deputy Associate Administrator for Aeronautics, NASA Headquarters Office of Advanced Research and Technology, from 1970 to 1971.

He resigned from NASA in 1971.
© History In Full Color
User Agreement
Cancel
Continue