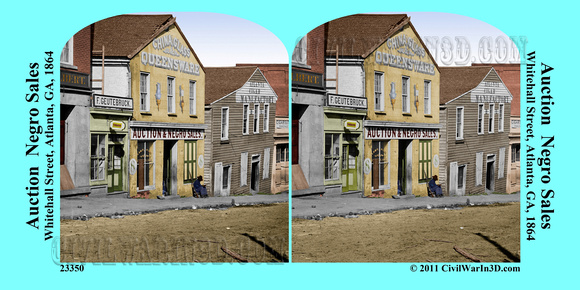 "Our Negro property has all vanished in the air." Atlanta diarist Atlanta residents had to endure the Siege of Atlanta during the hot summer months of July and August, 1863. They had to bear their city being surrendered to General Sherman's troops. Next, slaves were no longer property. The slaves in Atlanta knew about the Emancipation Proclamation that Lincoln had signed on January 1, 1863. The arrival of US troops meant their liberation. More to the point, one business in this picture was now illegal.
A casual glance would show a variety of business that you might find in any city in the country at the time. To the far left of this image was “Gilbert’s Jewelry Store” (only “LBERT” can be made out in the image). To the right was F. Geutebruck who dealt Cuban and American tobacco and snuff. To its right was China, Glass and Queensware with two more cigar manufacturer’s or wholesalers to the right of that. The first floor window of the China, Glass and Queensware store advertises the sale of “Lamp, Pine and Kerosene oils”. It is outside of this building that an African-American solider decided to rest. Just above his head hangs a sign announcing another commodity - slaves. “Auction & Negro Sales” available in the same building as fine china and lamp oil.

This building, as well as much of Atlanta was destroyed not long after this image was taken when the burning of Atlanta became the starting point of Sherman’s "March to the Sea".
© History In Full Color
User Agreement
Cancel
Continue