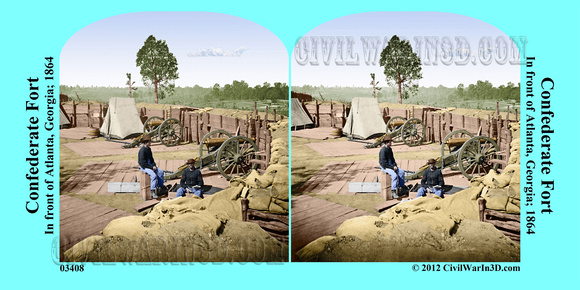 The Atlanta Campaign took place between May 7th and September 2nd 1864. This was a series of battles that moved south from Chattanooga to Atlanta. The Confederates slowly retreated until Sherman was able to take Atlanta.


The early battles were in Georgia, just south of the Tennessee border. As the summer progressed, the battles continued every few days, driving the Confederates south. To help ensure the safety of Atlanta, the Confederates had built a series of defensive forts around the city, much as the North had with Washington. These well protected fortifications could easily defend the city from even a dedicated assault.

Instead of striking these fortifications directly, small detachments would attack the supply lines. The Confederates would rapidly repair the damage and continued to fight. Sherman decided to attack the railroad supply lines in force. He moved more than 80 percent of his infantry corps against the lines. General Hood countered by sending two corps to defend the lines, not realizing that Sherman had three times the number of men. When that failed, Hood withdrew one of his corps as a defensive measure. His remaining corps was easily defeated and Hood was forced to abandon Atlanta. Afterwards, the Confederate forts were used by the Union to ensure that Atlanta did not fall back into Confederate hands.
© History In Full Color
User Agreement
Cancel
Continue