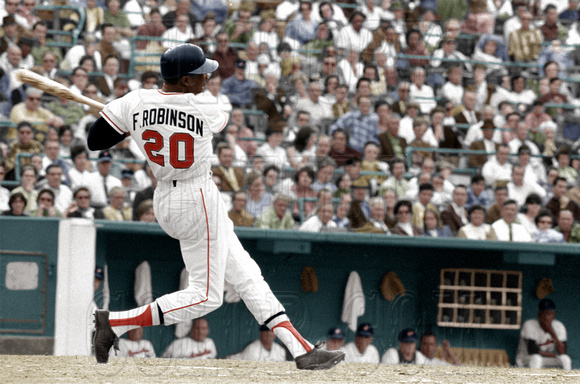 Frank Robinson was one of Major League Baseball’s all-time great home run hitters. Robinson hit 586 career home runs including hitting a run out of Memorial Stadium, Baltimore, Md., on May 8, 1966. He is the only player to have earned the Most Valuable Player award in both leagues. Robinson earned the American League Triple Crown in 1966, voted into the Hall of Fame in 1982 and the Baltimore Orioles, Cincinnati Reds, Cleveland Indians all retired Robinson’s number 20.

In 1975, he made history by becoming the first African-American player-manager of a major league baseball team.

"No, I don't think my presence will cause an increase in black attendance at Cleveland. People come out to see the players. When do you see a manager anyway? When he's out on the field arguing with the umpires, making a fool of himself and you know you can't win, and when he brings out the line-up card,” Robinson said.

An African American baseball manager was one of Jackie Robinson’s dream. The baseball legend believed that for segregation in baseball to be truly over, African-Americans needed to be allowed into management and ownership.

Sadly, Robinson’s skills as a top player did not help him as a manger. He was voted as the worst manager in baseball twice in a Sports Illustrated poll of MLB players.

In this image Robinson had swung the bat as the Baltimore Orioles plays the Boston Red Sox on May 19, 1966.
© History In Full Color
User Agreement
Cancel
Continue