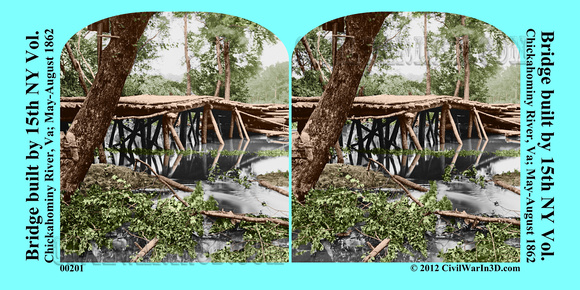 For most of the year, the Chickahominy is a small, easily crossed river. During rainy periods, the area turns into a swamp and can be as wide as a mile. It was in a rainy period, in 1862, that McClellan decided to bring his army across the Chickahominy, in an effort to reach Richmond.

The Confederates had retreated across the river after giving up Yorktown. As McClellan gathered his forces, the rains began to fall. What had been an easy crossing for the Confederates became a much more difficult obstacle for the Union army. A portion of the Army made it across before the rains started. Now McClellan had, in effect, split his army into two without a way to rejoin them.

Confederate General Joseph E. Johnston took advantage of the situation. Johnston decided to strike the portion that had already crossed the river and were now cut off from the greater part of the Army. The Union army was nearly defeated by the Confederates attacking at Fair Oaks and Seven Pines. It was only by building bridges, such as this, that allowed the Union forces to be reunited.

General Johnston was severely wounded during the assault and his army soon began to retreat to Richmond. At this point, McClellan was facing little opposition and possibly could have easily taken Richmond. This strategy may have either ended the war or forced the Confederate government to relocate. Instead McClellan moved slowly. Robert E. Lee took over command. Thereafter, the hopes of an easy Union victory were dashed.
© History In Full Color
User Agreement
Cancel
Continue