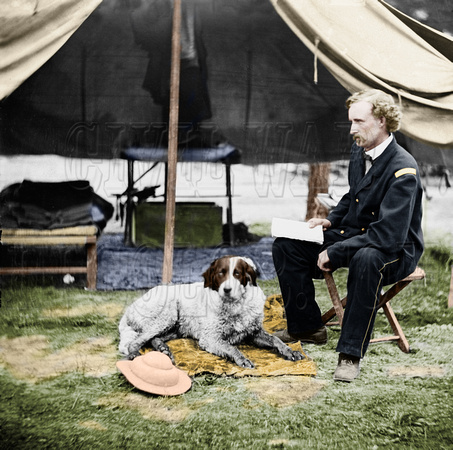 On March 10, 1862, 2nd Lieutenant George Custer led his first cavalry charge. To distract the Confederates as he shipped his troops to Fort Monroe, Va., McClellan had GEN Stoneman provide reconnaissance on land. Scouts had discovered Confederate pickets on the hill behind Catlett's Station. Stoneman sent orders to "Drive in the pickets."

As the only commissioned officer not on assignment elsewhere, Custer was in command of 100 horsemen. The cavalry rode to the base of the hill. The enemy began firing. Custer determined that there wasn't time to order artillery. He shouted to his men to "Draw Sabers!"

With his men ready, Custer roared "Charge!" Every horse leaped forward following Custer up the hill. The enemy rained bullets onto the swiftly approaching men. As the cavalry reached the hillcrest, the pickets fled towards the Confederate skirmish line. The cavalry dashed after them. The pursuit ended as 300 rifles began a blistering fire to protect their pickets. Custer ordered the riders to retire.

The jubilant commander and his men returned to camp. Custer had the pleasure of personally reporting to Stonemen that the mission had been accomplished - they had driven in the pickets.

By August, Custer would acquire the first of his many dogs, Rose. Although, the identity of this dog is unknown, it was the beginning of his custom of keeping dogs, among other animals, at his duty stations.
© History In Full Color
User Agreement
Cancel
Continue