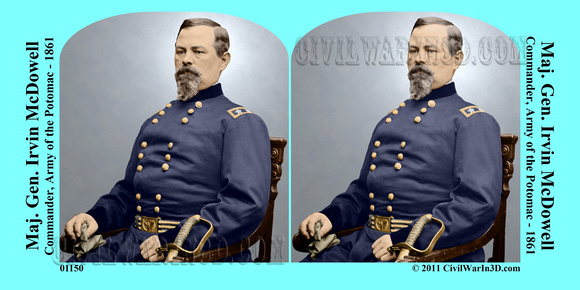 When you think of Union commanders during the Civil War you usually start with McClellan. He was however, the third General in charge of the Union forces. First, of course, was Winfield Scott, who was still on active duty at the start of the war. Between Scott and McClellan was Irvin McDowell. McDowell's 59 days of command was the briefest of the five men that held the title of Commander, Army of the Potomac. (Note both Scott and Grant were Commander of Union forces, not Army of the Potomac).

McDowell graduated at the age of 19 from West Point in 1838. He served during the Mexican American War as an aide-de-camp. Following the war his primary responsibility was as a logistics and supply officer. By the start of the war he was a Major but had established close friendships with both Winfield Scott and Treasury Secretary Salmon Chase. With these connections he was promoted to Brigadier General in May of 1861 and given command of the Army of Northeastern Virginia (which would later become the Army of the Potomac).

To his credit, McDowell knew he was not prepared to lead such a group of inexperienced troops. McDowell pleaded that he was a supply officer and didn't have any combat experience. With pressure from Washington for a quick and decisive end to the war, he was pressured to engage his former West Point classmate, P. G. T. Beauregard, at First Bull Run (First Manassas). His plan was much too ambitious for his inexperienced troops and he was defeated badly. With this loss, McClellan was given command of the newly renamed Army of the Potomac and McDowell was placed in charge of I Corps.

McDowell was immediately tasked with the defense of Washington and promoted to Major General. In 1862, he added the defeat of Second Bull Run (Second Manassas) to his list of losses and essentially was banned from command for two years. In 1864, he was once again in command, this time, however, of the Department of the Pacific in California. Following the war, he remained in the Army. After retiring in 1882, McDowell was appointed Park Commissioner of San Francisco, where he remained until his death in 1885.
© History In Full Color
User Agreement
Cancel
Continue