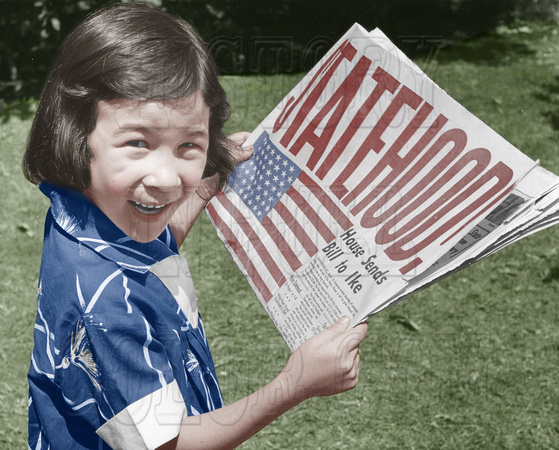 On August 21, 1959, Hawaii became the 50th state. This picture of six year old Mary "Dodie" Brown became one of the enduring images of Hawaii's statehood. Brown would later tell the story. It turns out that Brown’s father, photographer George Bacon, took the picture after friend and fellow photographer Murray Befeler captured the famous shot of 13-year-old paperboy Chester Kahapea selling commemorative copies of the Honolulu Star-Bulletin.

Bacon refused to be outdone by his colleague. “My father saw it as a challenge,” recalls Brown. “He called home and told my mother to put me in a muumuu. He came home with a copy of the newspaper, took my picture and rushed back to work.” Bacon put his daughter’s image on the Associated Press wire where it was picked up by newspapers and media outlets across the country.
© History In Full Color
User Agreement
Cancel
Continue