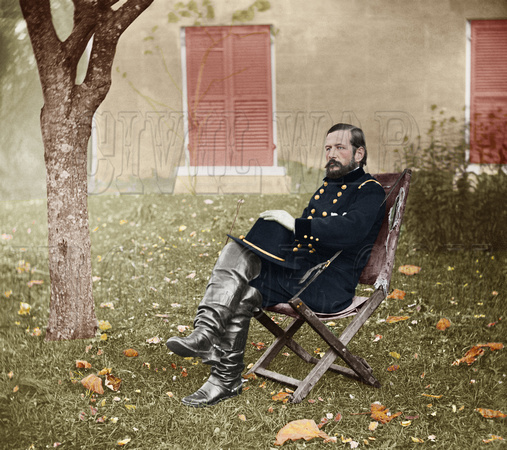 General Alfred Pleasonton was appointed commander of the Cavalry Corps of the Army of Potomac in May of 1863. Joining his staff & rapidly becoming his protégé was Captain George Custer. Pleasonton's cavalry was able to surprise Confederate General J.E.B. Stuart at the Battle of Brandy Station, one of the largest predominantly cavalry battle of the War. The ability to hold their own against the Confederates was a turning point for US cavalry. The battle also resulted in Pleasonton promoting Custer to Brevet Brigadier General.

In 1864, Pleasonton was transferred to the Trans-Mississippi Theater. During two key battles, he was able to defeat Confederate General Sterling Price, effectively ending the war in Missouri.
Restoration and colorization copyright 2014 by HistoryInFullColor.com
User Agreement
Cancel
Continue