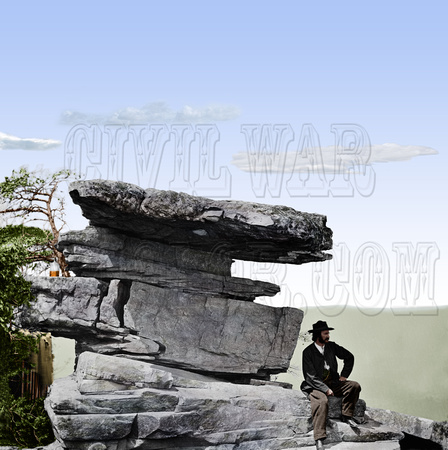 In November of 1863, the Confederates in Southern Tennessee and Northern Georgia were perceived to be in an enviable position. They had just defeated the Union army in a decisive victory at Chickamauga and now they controlled a 1,800 foot mountain overlooking the Union position. From the top of Lookout Mountain it is possible to see 100 miles and the steep 45 degree slopes made it difficult to approach. Essentially, the Confederates had the high ground, strong fortress walls and no way for the enemy to avoid detection. It seemed the perfect location.

The Union army realized that a traditional frontal assault would be suicidal. The alternative of flanking, would result in minor impact since the enemy would be able to see the movements for hours ahead of any attack. While the South had a slightly smaller amount of soldiers (Union 10,000 to Confederate 8,700) it was felt that the mountain would act as a multiplying effect that would give them a great advantage.

On November 24th the battle began with General Hooker’s (see card for more information) artillery barrage that would help mask the Union forces' advance from two sides. As they moved forward to the lower side of the mountain, the limitations of the Confederate position became apparent. While the defenders on the top could see the approaching forces, the cannons could not be used effectively at that range.

The Union position did not appear to be much better. While artillery was ineffective, it was also impossible to form a line and attack the Confederate positions. Tactics of the day called for defensive lines to be drawn up and for the opposing forces to attack in mass either in the center or from the sides. With steep terrain, rocks, cliffs and trees it was not practical to form an attack line.

As the Union forces began approaching the lower portion of the mountain, they scattered into small groups. Fog had settled in, obstructing the defending forces view of the attack. The Union army took the lower area, both forces became intertwined and it was difficult to tell where the front line was. Concerned, Hooker sent word to have his men halt for the day and create a defensive position that they could use the following day to proceed. Due to the conditions of terrain and fog, the order was unable to get to the troops. In a highly unusual development for a Civil War battle, the troops themselves took the advantage and continued advancing without orders or direction.

By the time they did stop, the Confederates had lost several thousand men both as casualties and prisoners. They could not fire on the Union position due to limitations of their weapons and it was only a matter of time before the Union army would take their position. Faced with losing all the remaining forces on the mountain, the Southern commander ordered all of the men to retreat, leaving the mountain unopposed in the morning.

While ultimately the battle emerged as a minor victory or defeat for either side, it was a great symbolic victory to have captured in one day a mountain that both sides had felt was out of reach. The impact that terrain and nature had on how the battle was fought, helped to keep the casualties, by standards of other Civil War battles, low. Due to the conditions of fog, the battle was described early on as “The Battle Above the Clouds”. Following the capture of the mountain, the Union forces reveled in the scenic beauty and were posing for pictures in places such as Umbrella Rock near the peak.
© History In Full Color
User Agreement
Cancel
Continue