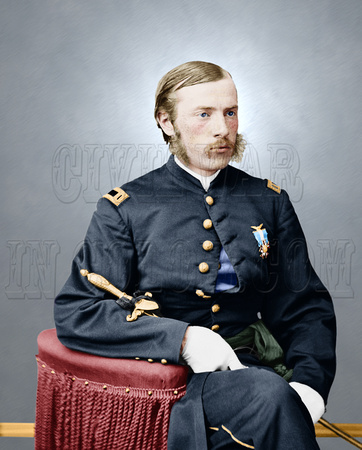 "Sometimes, recognition and reason return just before departure. I held his hand firmly to let him know, in his blindness, that he had a friend." Dr. Charles Leale

On April 14, 1865, 23-year-old Dr. Charles Leale took care of the most famous patient in his career – the dying Abraham Lincoln. Six weeks earlier, Leale had graduated from medical college. Joining the army as an Assistant Surgeon, he was assigned to care for wounded officers at a hospital in Washington, which made him familiar with gunshot wounds.

Three days earlier both Leale and John Wilkes Booth heard Lincoln’s last public speech outside of the White House. The talk was in response to Gen. Robert E. Lee’s surrender two days before. During the speech, Lincoln referred to black suffrage. Angry, Booth thought, “That is the last speech he will make.”

On the other hand, Leale was intrigued by Lincoln. Having heard the President was attending the play, “My American Cousin”, Leale went to Ford’s theater to have an opportunity to see Lincoln and “study the characteristics of the savior of his nation.”

Leale had “procured a seat in the dress circle about 40 feet from the Presidents Box. The play was then progressing and in a few minutes I saw the President, Mrs. Lincoln, Major Rathbone and Miss Harris enter; while proceeding to the Box they were seen by the audience who cheered which was reciprocated by the President and Mrs. Lincoln by a smile and bow.”

After Lincoln was shot and chaos and panic set in, Leale shoved his way through the crowd to the President’s Box. As Rathbone had been stabbed, Leale initially searched Lincoln’s shoulder for a similar wound before examining his head. There he found “the perfectly smooth opening made by the ball”. Using his finger, he removed a blood clot, which relieved the pressure. Lincoln began breathing easier. Not wanting to give false hope, Leale announced, “His wound is mortal. It is impossible for him to recover.”

It was Leale that decided and supervised the moving of Lincoln through the crowd to the nearest house. Although Dr. Stone, Lincoln’s family doctor arrived and took charge of Lincoln’s care, Leale holding Lincoln’s hand, stayed. During the night, Lincoln’s son Robert, cabinet members, and friends came to see the dying President.

According to Leale, at 7:20 A.M. Lincoln breathed his last, “the spirit fled to God who gave it.”

Dr. Leale wrote about this photograph:

“Among my relics I have a photograph taken a few days later in full staff uniform as I appeared at the obsequies. The crape has never been removed from my sword. I have my cuffs stained with the martyr's blood, also my card of invitation to the funeral services, held on Wednesday, April 19, which I attended.”

Dr. Leale returned to his work as a surgeon, forgetting his moment in history, until the 100th anniversary of Lincoln’s birth when he finally wrote “Lincoln’s Last Hours” for a speech he gave to the Military Order of the Loyal Legion of the United States in February 1909. Dr. Leale would live another 23 years until his own death at the age of 90 in 1932.
© History In Full Color
User Agreement
Cancel
Continue