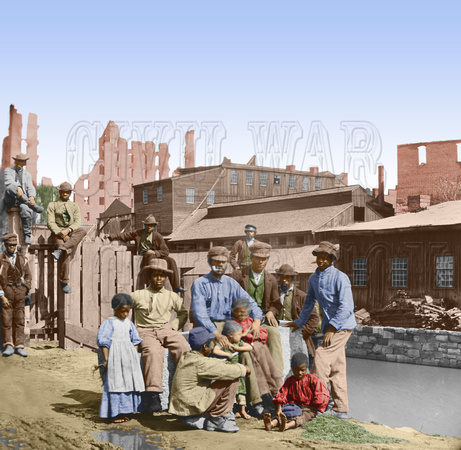 Across the South, slaves were liberated as Union troops would gain territory. On April 2, 1865, the Confederates abandoned their capital city, Richmond, with the expectation they would soon return. Two days later, President Lincoln arrived. The newly freed slaves were overjoyed to greet him.

Between 1860 and the end of the war, the legal terms and status of slaves went through a series of changes. Prior to the war, the Fugitive Slave Act of 1850 required all escaped slaves, upon capture, to be returned to their masters.

In 1861, US General Butler, a lawyer before the war, took the position that escaped slaves were "contraband of war". By not returning them, as required by law, he was depriving the Confederacy of their labor. Escaped slaves became known as "contraband".

By terms of the Emancipation Proclamation, slaves in the Confederate states were declared “freedmen”. However, only slaves in area controlled by the Union army actually enjoyed this status. The slaves in Richmond were among the last to be freed.
© History In Full Color
User Agreement
Cancel
Continue