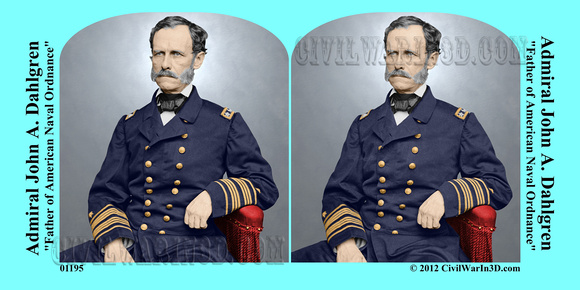 President Lincoln was "always delighted with the wise and witty sailor-talk of John A. Dahlgren." John Hays, Lincoln's Secretary

Lincoln and future Admiral John Dahlgren shared an interest in old machines and new inventions. Dahlgren had developed the Dahlgren Gun, for which he is best known. When his superior at the Washington Navy Yard resigned to join the Confederacy, Lincoln persuaded Congress to pass special act to legalize Dahlgren's appointment to head the Yard.

Afterwards, Lincoln and Dahlgren became close. Dahlgren would attend dinners at the White House, going on outings with Lincoln by carriage or boat. In his diaries, Dahlgren would describe Lincoln taking breakfast in his drawers and telling stories, or cruising up the Potomac and test-firing one of the "Dahlgrens" himself. He often quotes or paraphrases Lincoln.

Lincoln would often go the Navy Yard to hang out with Dahlgren. In April 1863, Lincoln told Dahlgren, "Well I will go home....I had no business here; but, as the lawyer said, I had none anywhere else."
© History In Full Color
User Agreement
Cancel
Continue