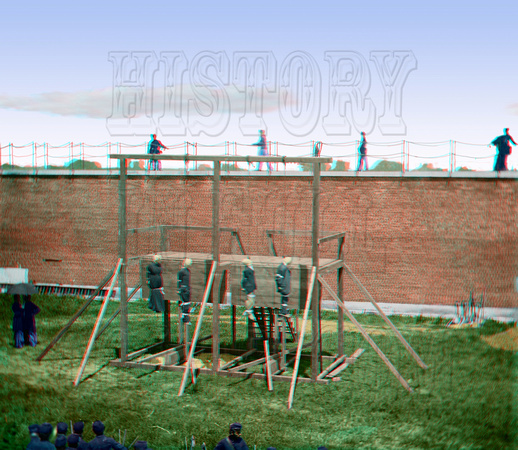 
Whereas, the plot to assassinate Lincoln was conceived of in one day, the conspirators had been plotting to harm Lincoln for nearly a year. Booth originally planned to kidnap Lincoln and use him to exchange Confederate prisoners held in the North. Looking for an opportunity to capture Lincoln, Booth stood outside the White House and overheard that Lincoln would be attending the play “Still Waters Run Deep” at the Campbell Military Hospital. He gathered the other conspirators that he had assembled months before and waited in route for Lincoln to travel to the Hospital. There they would overthrow the guard, capture the president and hold him hostage.


Unknown to Booth, Lincoln had changed his mind and decided instead to attend a ceremony for Governor Morton of Indiana that was being held at the National Hotel, which was the very hotel that Booth was staying! With Booth camped along the roadside he missed his easiest opportunity to harm the president and returned home empty handed. A month later things were looking worse for the Confederates.


The capitol of Richmond had fallen on April 3rd. Within a week Lee had surrendered at Appomattox. Jefferson Davis had not been captured, and a few Confederate troops continued to fight in the field. With the South at its lowest, Booth received news that Lincoln would attend Ford’s Theatre on April 14th. With just hours to prepare, he gathered his group from the kidnap plot and decided to not only kill Lincoln but also the Vice President and the Secretary of State. His hope was that total loss of the head of government in the North would rally the South, from what otherwise was sure defeat.


While Booth succeeded in his quest, the plot to kill the Secretary of State (William Seward) and the Vice President (Andrew Johnson) ended differently. Seward was severely wounded in an attack by Lewis Powell but survived. For the next three days he wandered aimlessly around Washington. Unfamiliar with the area he decided to go to the one place he did know; Mary Surratt’s boarding house. On April 17th he arrived while Mary was being questioned about connections to Booth that had been found in his hotel. Powell claimed that he had been hired by Mary Surratt but she denied knowing him. Suspicious, the Army officers questioning Mary arrested both of them until they could decide his involvement.


George Atzerodt, who was assigned to kill Johnson, spent the night drinking and was captured a few days after Powell. The rest of the conspirators, with the exception of Mary’s son John, were captured within a few weeks and placed on trial. A total of eight conspirators were tried and found guilty on June 30th, four were sentenced to death.


Construction of the gallows began on July 5th in the Arsenal courtyard of Fort McNair in Washington. At noon the following day the prisoners were told that the execution was scheduled for the next day. On the day of the execution the soldiers began testing the gallows about 11:30 AM which unnerved all the prisoners. By noon the temperature was already above 90 degrees, but each of the prisoners was required to remain hooded waiting execution. Finally at 1:15 the four were brought to the gallows. Approximately 200 people were allowed to attend the execution, including the photographer Alexander Gardner.


After allowing the bodies to hang for 30 minutes they were inspected to insure the execution was successful and then each was buried in a shallow grave that had been dug in advance. The bodies remained in the arsenal for two years until the Army moved the bodies to another site on the fort to make room for a planned construction project. The body of John Wilkes Booth was buried alongside of them at that time. After another two years the bodies of Booth and the conspirators were returned to their family and laid to rest in private plots.
© History In Full Color
User Agreement
Cancel
Continue