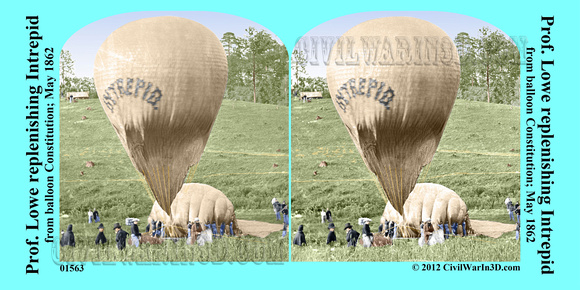 Professor Thaddeus Sobieski Coulincourt Lowe was born in New Hampshire in 1832 and by his late 20’s was well known for his expertise in chemistry, meteorology, and aeronautics. At the age of 18 he attended a chemistry lecture given by Professor Reginald Dinkelhoff regarding lighter than air gasses. When the call was made for a volunteer from the audience, Lowe immediately leapt to the stage. Dinkelhoff offered to mentor Lowe and for the next two years apprenticed with the Professor. When Dinkelhoff decided to retire he conferred the title of “Professor” upon Lowe.


Despite having little formal education he absorbed knowledge and quickly became an authority on many topics. He began building balloons in 1857 and even attempted crossing the Atlantic in 1860. During a test flight in April of 1861 his balloon travelled from Cincinnati to South Carolina where he was arrested as a spy. When he established himself as a scientist he was allowed to return to North. The notoriety of his flight was not lost on the White House. By June he took the balloon to Washington and demonstrated it for Lincoln.


Given the title of “Chief Aeronaut” Lowe was given a Colonel’s pay of $10 in gold per day. He built a series of seven balloons and used them in 1862 to help McClellan during the Peninsula Campaign. During the battle of Seven Pines he was filling two balloons, Intrepid and Constitution. Suddenly changes in the battle dictated that an observation balloon be flown immediately. With more than an hour to go he decided to connect the two balloons and transfer the hydrogen from the Constitution to the Intrepid. Within fifteen minutes the balloon was ready. Later it was estimated that the savings was worth a “million dollars a minute” to the Union army.


Used again at the battle of Antietam and Fredericksburg the value of observation balloons seemed obvious. In 1863 the Balloon Corps was reassigned to the Engineers Corps. Lowe’s pay was reduced from $10 to $3 and the use of balloons was called into question. In May of 1863 Lowe resigned and by August the balloon corps no longer existed.


Following the war Lowe amassed a fortune from his experiments and business ventures. In 1887 he moved to Pasadena California and built a 24,000 square foot mansion. He owned the water and gas company, a bank, several ice plants and the opera house. In 1893 he built an electric railroad to the top of Echo Mountain where he owned an 80 room hotel. By 1899 the project failed financially leaving Lowe impoverished. Lowe died in 1913 at the age of 80 and is buried in Altadena, California.
© History In Full Color
User Agreement
Cancel
Continue