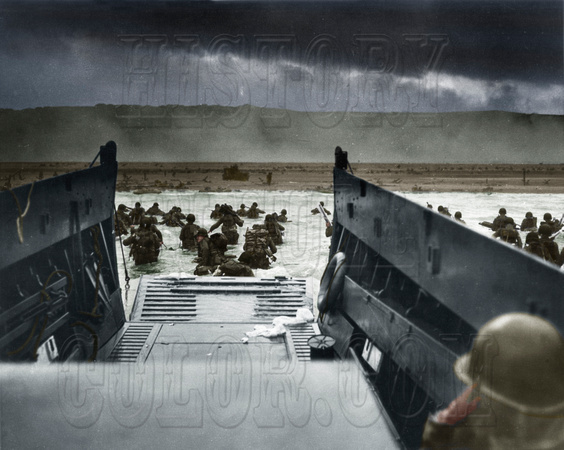 "My God, we're coming in at the right spot, but look at it! No shingle, no wall, no shell holes, no cover. Nothing!" – Lt. Edward Tidrick, 116th Infantry, 29th Division


On June 6, 1944, from the clifftops at Omaha Beach, the Germans fired anti-tank guns, light artillery, riffles, mortars and machine guns at the arriving U.S. troops. Omaha Beach had the highest casualty rate of the out of the five allied landing points.

The transports were timed to arrive midway between high and low tides. At 6:30 a.m. the ramps dropped. The men jumped into the water which was waist deep or above a man’s head. The overburden packs dragged the men down. Some of the men managed to grasp the sides of the boat to stay afloat.

The survivors struggled out of their packs to float with the tide to shore. The Germans opened fire, ripping apart the approaching men. The sea turned red. The lightly wounded drowned, still wearing their packs.

Within seven minutes the first wave is inert. Most of the officers are dead. One transport disappeared, leaving only bodies that float ashore. Within 15 minutes, the first company has not fired a shot. Approximately two thirds never make it off the beach alive.

The transports continue to arrive. The men who escape drowning, had to cross open sand, using water-filled troughs called runnels. The next obstacles were a sea wall topped with razor wire, a minefield up to 200 yards long, and scaling cliffs up to 170 feet tall to reach the German positions.

On D-Day, the high ground was won with the sacrifice of thousands. The victory at the Battle of Normandy earned the Allies a toehold to begin the push to defeat the Nazis in Germany. It began with the first men who braved the first wave that hit the beach.
© History In Full Color
User Agreement
Cancel
Continue