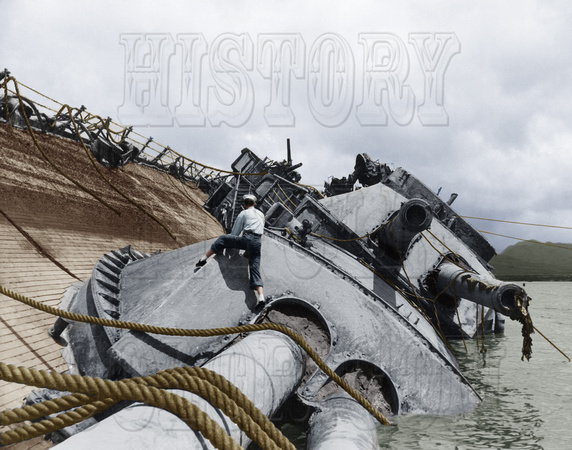 "With difficulty I made the starboard side and climbed into my room which I knew had an open port. The porthole was almost overhead and I climbed through it, slid down the side which inclined about 50 [degrees] and jumped into the water." 2nd LT William G. Muller, Jr.

On December 7, 1941, it took 8 torpedoes and 10 minutes for the USS Oklahoma to capsize during the attack on Pearl Harbor. A ninth torpedo hit as the Oklahoma sank into the mud. Most of the men were below deck as the Oklahoma's hull turned towards the sky.

As the battle continued to rage, each man had to fight his way topside through the water and oil cascading into the rolling ship. After a 50' leap into the ocean, the 6" layer of oil floating around the dreadnought made swimming challenging.

From the planes above, the enemy would strafe the swimmers. Worse, the oil caught on fire. Men had to choose whether to jump into the burning water or stay on the doomed ship.

Trapped inside of the Oklahoma, men were pounding on her hull for help. As the men waited for rescue, they would bet on whether they would die of drowning or lack of oxygen. It may have taken 30 hours, but James Bounds, Seaman 1st class, was one of the 32 men rescued by cutting through the hull. His group survived by moving from compartment to compartment as the air supply diminished.

The USS Oklahoma had a ship's complement of 2166 Navy and Marine officers and enlisted men. 14 Marines and 415 sailors gave their lives as a result of the attack.
© History In Full Color
User Agreement
Cancel
Continue