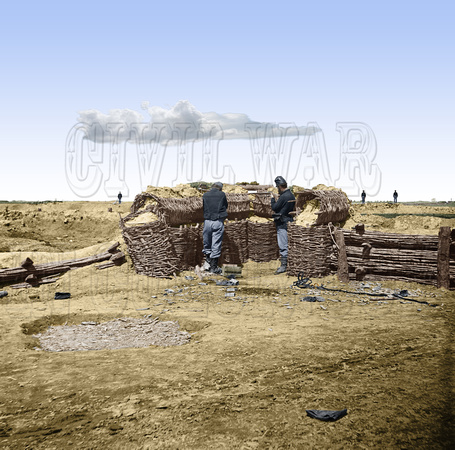 Union pickets are standing behind “gabions”, which are wicker baskets filled with dirt, sand or any other debris that could be salvage. The advance guard for a large force are known as pickets. By its nature, picket duty is the most hazardous work of infantrymen in the field. Therefore, by regulation, picket duty is rotated regularly in a regiment.


Here the pickets are keeping both eyes on Fort Mahone, a Confederate three-sided work that was somewhat in advance of the main lines at Petersburg. The Fort was considered one of the strongest points of the Confederate line. After previous attacks ended in high casualty rates, US troops referred to it as "Fort Damnation”.
Restoration and colorization copyright 2014 by HistoryInFullColor.com
User Agreement
Cancel
Continue