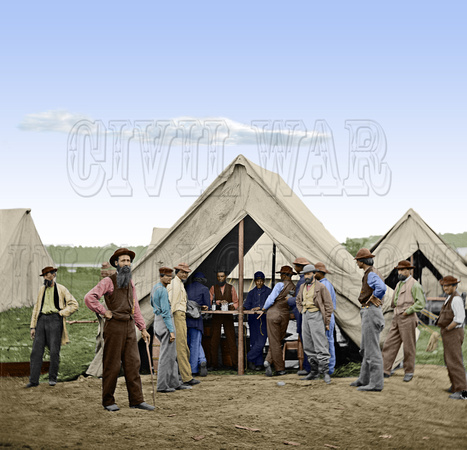 During the Civil War, Sutlers offered supplies to the men that the Army did not provide. These mobile salesmen offered goods such as tobacco, coffee and sugar. They also provided diversions such as gambling, drinking and prostitution.

While these men received a license from the commander prior to establishing shop, they would charge exurbanite prices to provide goods to the soldiers. Often the soldiers could only afford to purchase items for a few days after payday, before their funds had run out. Offering credit to the men they would then often collect as much as 3-4 month’s pay from the paymaster to settle outstanding debts.

The role of the Sutler continued after the war, where they established stores near Army posts. During the 1870’s – 1890’s they offered goods not only to the soldier, but also to traveling civilians that used the forts as safe havens while travelling west.

Today Sutlers can still be found at most Civil War Reenactments. While traditionally they sold the things that the Army did not provide, the modern Sutler sells reproduction uniforms, tents and weapons as well as souvenirs for “civilians”.
© History In Full Color
User Agreement
Cancel
Continue