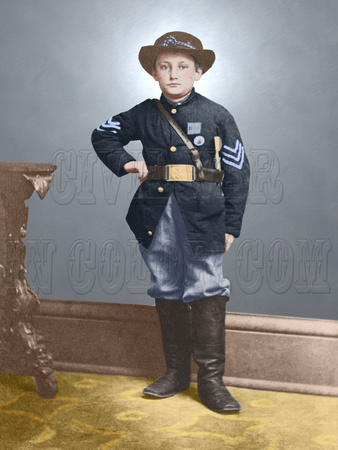 It being Sunday, May 24, 1861, and the great rebellion in progress, Johnnie said at the dinner-table: “Father, I’d like mighty well to be a drummer boy. Can’t I go into the Union army?” “Tut, what nonsense, boy!” replied father, “you are not ten years old.” Yet when he had disappeared it is strange we had no thoughts that he had gone into the service recalled his sister Lizzie.


The family feared that Johnnie had drowned in a nearby canal and mourned for him for two years. Instead Clem had joined the 22nd Michigan as a drummer boy. He was in many battles and was captured in Chattanooga, Tennessee.


Clem said that the rebels stole about all that he had, including his pocket book, which contained only twenty-five cents. “But I would not have cared for the rest,” he added, “if they hadn’t stole my hat, which had three bullet holes in it, received at Chickamauga.”


Clem became famous in both the North and the South as the "Drummer Boy of Chickamauga". The Confederate newspapers used his age and celebrity status to claim, "what sore straits the Yankees are driven, when they have to send their babies out to fight us."


A daughter of Chief Justice Salmon Chase presented him with a silver medal inscribed, “Sergeant Johnnie Clem, Twenty-second Michigan Volunteer Infantry, from N. M. C.,” which he wore in at least one of the many pictures taken by photographers hoping to profit from the young boy’s newfound celebrity.


When he was exchanged as a prisoner he came home for a week. He was wasted to a skeleton. He had been starved almost to death. He seemed like as if he was done up in a mass of rags. There were no soldier clothes small enough to fit him, and he was so small and wan and not much larger than a babe, about thirty inches high, and couldn’t have weighed over sixty pounds according to his sister.


For his heroic conduct, Clem was made a sergeant by General Rosecrans, who placed him upon the Roll of Honor, and attached him to the headquarters of the Army of the Cumberland. At the age of 13, Clem became the youngest non-commissioned officer in the U.S. Army ever. He rose to the rank of Colonel and became the last soldier of the Civil War to retire from active duty in 1916. Upon his retirement he was promoted to Brigadier General. He died in 1937 and is buried at Arlington.
Restoration and colorization copyright 2014 by HistoryInFullColor.com
User Agreement
Cancel
Continue