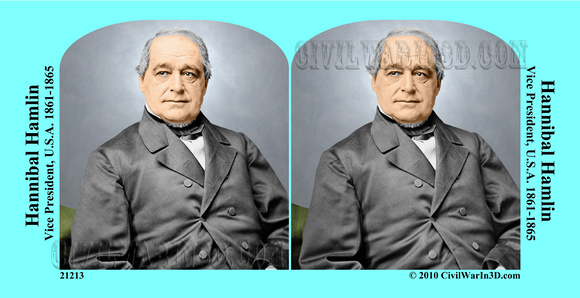 "I am only a fifth wheel of a coach and can do little for my friends." Hannibal Hamlin

Hannibal Hamlin enjoyed being a U. S. Senator. In 1860, while playing cards in his home state of Maine, he was surprised to discover that he was running as Vice President on the Republican ticket. As he wrote in letter to his wife, "I neither expected or desired it. But it has been made and as a faithful man to the cause [of limiting slavery], it leaves me no alternative but to accept it."

After running on a platform of preserving the Union and stopping the spread of slavery, Lincoln and Hamlin finally met three days after the election. It was the start of a cordial but not close relationship. Hamlin was able to influence the naming of Gideon Welles as the New England representative in the cabinet. He also pushed for Negro rights, emancipation and the use of black soldiers.

One of the positives of having an abolitionist Vice President - Lincoln questioned if “the Richmond people would like to have Hannibal Hamlin here any better than myself? In that one alternative, I have an insurance on my life worth half the prairie land in Illinois.”

Presiding over the Senate wasn't as interesting as being a Senator to Hamlin. Bored of being the "nullity", Hamlin returned home and enlisted as a private in the Maine Coast Guard. As acknowledgement of being Vice President, Hamlin may have bunked with the officers but drilled, stood guard duty and cooked with the enlisted men.

In 1864, the Republican Convention replaced Hamlin with Andrew Johnson as Vice President on the ticket. To console the disappointed Hamlin, Secretary of the Senate John W. Forney wrote, "To be Vice President is clearly not to be anything more than a reflected greatness. You know how it is with the Prince of Wales or the Heir Apparent. He is waiting for somebody to die, and that is all of it."

By chance, two of Hamlin’s children — Sarah and Charles — remained in Washington after the 1865 Inauguration and were at Ford’s Theater on the night President Lincoln was assassinated. Hamlin’s daughter Sarah, felt a “chill passing over” as Booth leapt to the stage near where she was seated.

As Senator, Hamlin did return to Washington; serving from 1869-1881. While playing cards at a local men’s club in Maine, Hamlin died in 1891.
© History In Full Color
User Agreement
Cancel
Continue