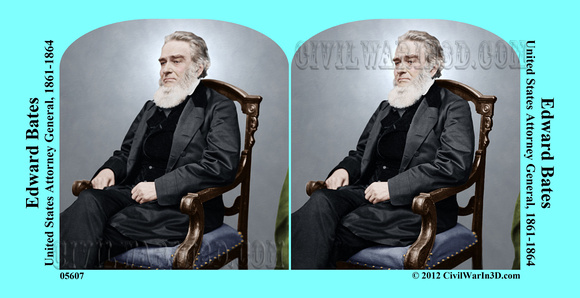 Born in Virginia in 1793 Edward Bates served as a sergeant during the war of 1812, following the war he began working with his brother, who was an attorney. Within a few years he was admitted to the bar and began to practice law. In the 1820’s he was elected to the Missouri House of Representatives and then to the US Congress in 1827 for one term. During the 1830’s he served in the state senate, but was unsuccessful at U.S. Senate. By the 1840’s he was politically active, but earned his living practicing law.


During the 1850’s he refused an appointment as Secretary of War and was considered as the Vice-Presidential nominee in 1852 as a Whig. In the 1860 election he was one of the four leading Republican candidates for President, ultimately losing to Lincoln. Lincoln appointed him Attorney General after the election and Bates served till 1864.


In the beginning he was supportive of Lincoln and helped to enact several of his polices. Lincoln and Bates did not agree, however, on emancipation and recruitment of blacks in the Army. When the position of Chief Justice came open in 1864, Bates felt he was right for the job, but instead it was offered to Salmon Chase. With this he decided to leave Lincoln’s cabinet.


Bates returned to Missouri and by 1865 had left politics altogether to spend time with his wife and 17 children. He died in St. Louis in 1869.
© History In Full Color
User Agreement
Cancel
Continue