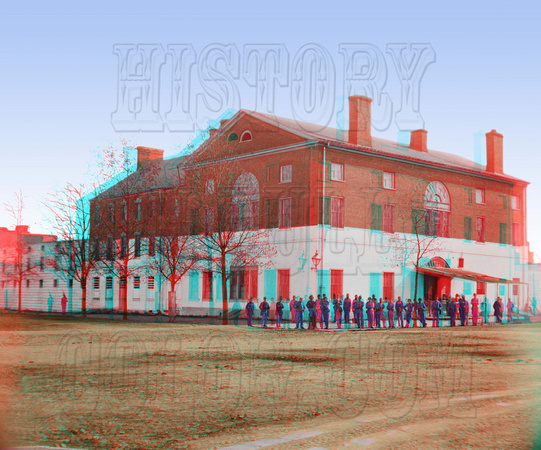 
What became known as “The Old Capitol Prison” was once the U.S. Capitol. During the War of 1812, the British burned the U.S. Capitol, leaving Congress without a place to meet. A brick building was quickly built to serve as the temporary Capitol until a permanent Capitol building was completed in 1819. Then known as the “Old Brick Capitol”, for the next 40 years the building served in various capacities - first as a private school and later as a boarding house. John Calhoun, former Vice President of the United States, died in the house in 1850.


By the start of the Civil War, the federal government purchased the property with the intent of making it a federal prison. At this time it acquired the name “The Old Capitol Prison”. Used mostly for captured Confederates, insubordinate Union Officers and even prostitutes, it became famous for its prisoners.


The list of well-known prisoners includes Dr. Samuel Mudd (who treated John Wilkes Booth’s broken leg) and Mary Surratt, who was hanged for her part in the Lincoln assassination. Other famous women that spent time in the prison were Confederate spies Rose Greenhow and Belle Boyd. Famed Confederate raider, John Mosby passed through as did the owner of Ford’s Theatre, John Ford. Henry Wirz, commander of Andersonville prison in Georgia was hung in the prison yard. Following the war the prison was closed. The property again became private residences and even used as the headquarters of the National Women’s Party. The federal government reacquired the property in 1929. The building was cleared to make room for the current site of the U.S. Supreme Court.
© History In Full Color
User Agreement
Cancel
Continue