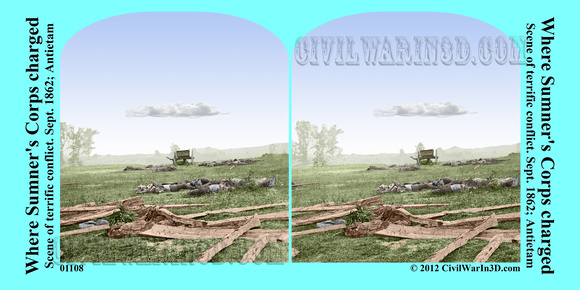 At the beginning of the battle of Antietam McClellan assessed his position. He had in his command 75,000 men against an estimated enemy of 120,000 under Robert E. Lee. Faced with these overwhelming odds McClellan was cautious and reduced the authority of many of his generals. In reality Lee did not have 120,000, but closer to 38,000. McClellan managed to reduce his own strength by limiting his commanders.


The battle started early and by 7:30 AM the Union army was struggling. To relieve the pressure McClellan ordered Edwin Sumner to lead his 15,000 men as part of II Corps to support General Sedgwick. After a two mile march they arrived around 9:00 AM. At that point Sumner effectively lost control of his division when the Confederates counterattacked. Suffering nearly 40% casualties General Sedgwick was forced to retreat and General Sumner’s charge entered the history books as a reckless attack. More modern review of Sumner’s actions is more favorable of his actions, but it still ranks as a low point in the battle for the Union army.
© History In Full Color
User Agreement
Cancel
Continue