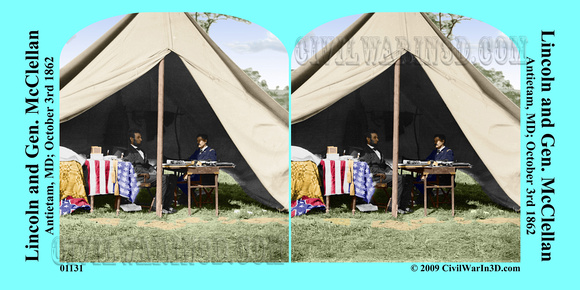 In a letter to Mary, Lincoln reveals both his famous sense of humor as well as his growing frustration with McClellan. “Gen McClellan and myself are to be photographed,” he wrote, if “we can sit still long enough. I feel Gen. M. should have no problem.”

After the Battle of Antietam, to encourage McClellan to pursue the Confederates into Virginia, Lincoln travels to Sharpsburg. He visits field hospitals and reviews the troops. Lincoln tours the Antietam battlefield in an ambulance, sitting, "with his long legs doubled up so that his knees almost struck his chin", a federal officer noted.
The men have cross purposes. McClellan writes in his journal:

Oct. 2, A.M.--…I found the President at Gen. Sumner’s headquarters at Harper’s Ferry... His ostensible purpose is to see the troops and the battlefield; I incline to think that the real purpose of his visit is to push me into a premature advance into Virginia. I may be mistaken but think not. The real truth is that my army is not fit to advance... These people don’t know what an army requires, and therefore act stupidly…

At one point Lincoln invites his friend Ozias M. Hatch for a walk. On a hillside, Lincoln gestures in despair at the expanse of white tents spread out below then and inquired, "Hatch, Hatch, what is all of this?"

"Why, Mr. Lincoln," answered Hatch, "this is the Army of the Potomac."

"No Hatch, no," replied Lincoln. "This is McClellan's body guard."

In the famous photograph we see the men sitting facing each other but are miles apart in agreeing on the next steps for the army. On the ground, at lower left, is a Confederate battle flag taken during Lee's Maryland Campaign. After midterm elections are over, Lincoln relieves McClellan of his command for having "the slows".
© History In Full Color
User Agreement
Cancel
Continue