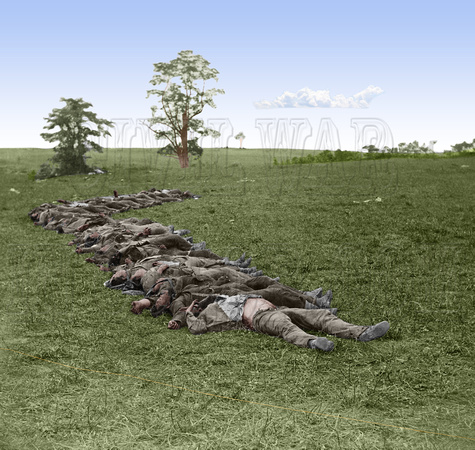 Images such as these dead Confederates gives us a poignant reminder of both the horror of war and the struggle to document it. Due to photographic limitations, it was not possible to produce images during battle, so photographers used creative ways to tell the story. Using dead bodies not only allowed a vivid depiction of the battle but also a glimpse of the Confederate army.


These sorts of images and many others from the war are attributed to Mathew Brady, who has become known as THE source for most Civil War photographs. What few realize is that while Brady owned the studio, it was photographers such as Alexander Gardner, who took this image that performed the actual work in the field.


Gardner was born in Scotland in 1821 and moved to the U.S. in 1856. Within two years he was managing Brady’s studio in Washington. Gardner’s relationship with Allan Pinkerton made him the ideal photographer for the Army of the Potomac when Pinkerton was placed in charge of intelligence for McClellan. Gardner followed the army until Antietam. At this point, when McClellan was replaced, both Pinkerton and Gardner found themselves on the outside.


Gardner became disgruntled with Brady for his practice of labeling all photographs commissioned by his studio as “Photograph by Brady” rather than “Brady Studio” and attributing the individual photographer. By May of 1863 Gardner began to compete directly with Brady and hired many of Brady’s best photographers to work for him. Many of the great images of the war from that point were the work of Gardner’s studio and not Brady’s.


Following the war he published “Gardner's Photographic Sketch Book of the Civil War” which today is still considered to be one of the finest collections of images of the war. While he owned the images outright, he was careful to attribute the actual photographer and not make the claims that Brady had. Within six years of the end of the war, Gardner had left photography and opened an insurance company. When asked about his work during the war Gardner replied, “It is designed to speak for itself. As mementos of the fearful struggle through which the country has just passed, it is confidently hoped that it will possess an enduring interest.” He passed away in 1882. Much of his work was forgotten until 1893, when one of Gardner’s former employees, J. Watson Porter went looking for them. Tucked away in Gardner’s old house in Washington were hundreds of the original glass plates, including this one.
© History In Full Color
User Agreement
Cancel
Continue