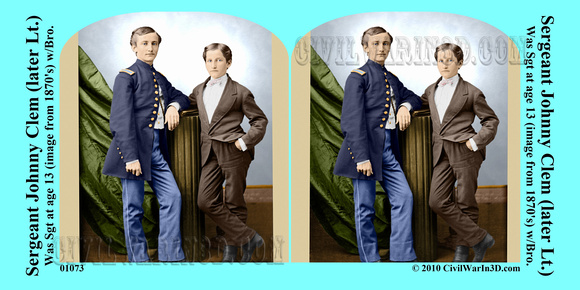 Famous as the "Drummer Boy of Chickamauga", John Lincoln Clem was made a sergeant by General Rosecrans, who placed him upon the Roll of Honor, and attached him to the headquarters of the Army of the Cumberland. At the age of 13, Clem became the youngest non-commissioned officer in the U.S. Army ever.

On July 6, 1864, the War Department forbid any officers to enlist any soldier under 16 or face severe penalties. Almost a month later, Lt. Col. Henry Dean of the 22nd Michigan requested Clem to be released from service so that he “may have a better opportunity for educating himself.”

During the 1864 Presidential election, all soldiers of the army were allowed to vote. Although under the age of 15, Johnny Clem was still a soldier in the army and he voted legally.

While awaiting his discharge, Clem went to Carlinville, Illinois, where he started school. But the war remained very much on his mind; In a letter to Capt. Sanford C. Kellogg, an officer in his former unit, in September, he wrote, “I am going to school here and am very much pleased with the institution and my schoolmates. Please tell my Colonel to write to me as soon as he can … How is Georgie Lutz getting along? Who has my little pony now? … If any of the officers are willing to write to me I would be very much pleased to hear from them.”

Clem graduated High School in 1870. President Ulysses S. Grant nominated Clem to become a student at the United States Military Academy at West Point. However, Clem repeatedly failed to pass the entrance exam. In 1871, Grant overlooked Clem's failures and appointed him a second lieutenant in the United States Army.

This image was probably taken shortly after that time. He is seen with his younger brother Louis, who was then about 12 years old.

Clem loved his brotherly dearly. He would write to Louis regularly, used his Washington connections to get him work and offered to help him set up a bookstore.

Like his brother, Louis yearned for travel and decided to go to Wyoming Territory. On May 1, 1876, as a non-combatant, Louis was killed in a battle with Indians near Custer City, SD. He was less than 21 years old.

Johnny Clem rose to the rank of Colonel and became the last soldier of the Civil War to retire from active duty in 1916. Upon his retirement he was promoted to Brigadier General. He died in 1937 and is buried at Arlington.
© History In Full Color
User Agreement
Cancel
Continue