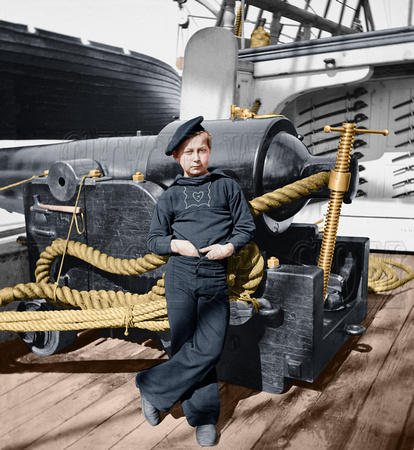 The boy in the image is believed to be Aspinwall Fuller. In 1864, he enlisted in Baltimore, Maryland at the age of 13. While it may seem wrong today for someone of that age to serve in the military, it was common at the time of the Civil War. The great Civil War admiral, David Farragut started his career at the age of nine and was given command of a captured ship at the age of 12.


In the age of sail, the job of Powder Monkey was critical to deliver gun powder from the storage magazines below the waterline to the cannon on deck. It was too dangerous to have large amounts of powder on deck in case of explosion. It was preferred to have young boys carry the powder to the cannon crew. Boys of 12-14 often performed this job due to their speed and small size. Speed was obvious and the small size helped to reduce them as a target from enemy sharpshooters that may be firing on them as they delivered the gunpowder.


When not in combat they performed maintenance duties around the ship as they learned the trade of becoming a sailor. As the age of sail came to an end, so did the need for Powder Monkeys. Today the powder is still stored in magazines below decks but is delivered to the gun via elevators and other mechanical devices.


Aspinwall Fuller went on to be the president of the Marine Engineer’s Beneficial Association and served in that capacity until his death in 1888.
© History In Full Color
User Agreement
Cancel
Continue