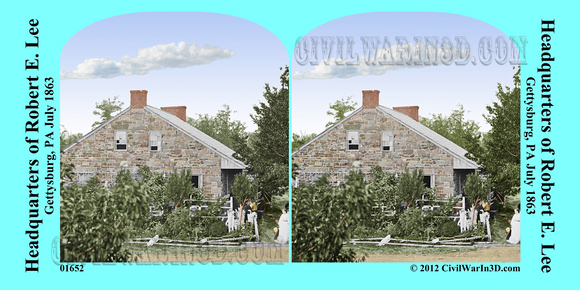 Today, remembered as the headquarters of Robert E. Lee during the battle of Gettysburg, the house itself has other connections to the war. Often referred to as the “Widow Thompson house”, it was originally built in 1834 by Thaddeus Stevens, a prominent, successful Gettysburg lawyer and US Congressman who lived in the home for eight years.

Early in his law career, Stevens won a case that resulted in a runaway slave being returned to bondage. It caused Stevens to really think about slavery and became a dedicated abolitionist. Stevens' Lancaster, Pennsylvania home was an underground railroad station. As the Chairman of the House Ways and Means Committee, he supported Lincoln's announcement of the Emancipation Proclamation with the funds to finance the war. He pushed the passage through Congress of the 13th Amendment, to outlaw slavery forever. He worked to impeach President Johnson for trying to prevent Stanton, the Secretary of War, from protecting the rights of freed slaves. It is a twist of fate, that the Confederates choose Stevens' home as General Robert E. Lee's headquarters.

While Stevens still owned the house at the time of the battle, it was Mary Thompson, known as the “Widow Thompson” who lived in the home when the battle began. The house itself is situated in an ideal location across the street from the Lutheran Theological Seminary and on one of the main roads to the battlefield. The stone walls afforded Lee a degree of protection from artillery rounds and allowed him to quickly assess the battle from the top of the seminary building. While unhappy with having Lee as a house guest, Thompson reported that he was a gentleman during his stay. She did not say the same about the other Confederates that also occupied the house.

Following the war the house remained a private residence until 1922, when it was opened as the “Lee Museum”. It is one of the oldest continuously operating Gettysburg museums. While some structural changes have taken place, the exterior today is much as it was in 1863.
© History In Full Color
User Agreement
Cancel
Continue