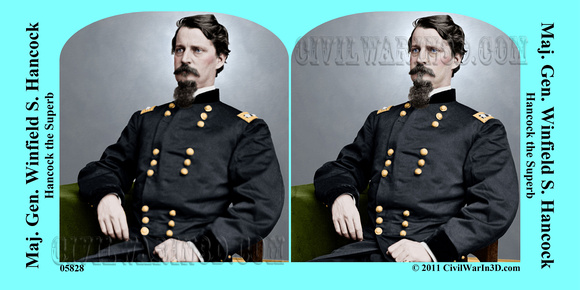 Winfield Scott Hancock, an identical twin, was named for famed Union General Winfield Scott. Born in Pennsylvania in 1824 he entered West Point when he was only 16 and graduated in the bottom third of his class in 1844. With the outbreak of the Mexican-American War in 1846 he travelled to Mexico to participate in the war led by his namesake. Wounded the following year he developed a fever and was unable to participate in much of the rest of the war.

By the start of the Civil War he had married and been promoted to Captain. Assigned to quarter master duties in California prior war he returned east to become quartermaster for the Union Army. Within months he was promoted to Brigadier General and given an infantry brigade. During the Peninsula Campaign in 1862 General McClellan was so impressed with Hancock that he sent a telegraph to Washington stating “Hancock was superb today". From that point “Hancock the Superb” was born. Sadly, while Hancock may have been superb, McClellan did not take advantage of the opportunity that Hancock had given him and lost an opportunity to have a major victory early in the war.

Serving with distinction at Antietam, Fredericksburg and Chancellorsville he was wounded twice and promoted to Major General. At the start of Gettysburg Meade, who had just taken command of the Army of the Potomac, chose Hancock over more senior officers to take command in the field and assess the situation. By the end of the first day of battle the Union Army was outnumbered and the tide seemed to be going the way of the Confederates. Meade had given Hancock the authority to retreat, instead he chose to take a stand on Cemetery hill.

The following day with Meade now on the field, Hancock led the troops at Cemetery Ridge, which was near the center of the Union position. At one point the fighting was so intense that the Union line was beginning to fall into disarray. To give time to reorganize he sent the 1st Minnesota to attack a Confederate position that was four times larger. Only 13% of the men survived without being killed or sustaining wounds, but their sacrifice provided the valuable time that Hancock needed to strengthen the rest of the line.

On July 3rd Hancock was on the receiving end of Pickett’s Charge. Hancock rode his horse along the line to ensure that his men knew he was there and provide moral support. When one of his officers tried to persuade him to move to the rear Hancock replied "There are times when a corps commander's life does not count." Shortly after he was wounded when a round struck his saddle and pierced his thigh. For his gallantry and bravery he was awarded the “Thanks of Congress”. While he continued to command troops, the effect of this wound affected him the rest of the war.

Following the war he supervised the execution of the Lincoln assassination conspirators. He then became, in effect, Military Governor of Texas and Louisiana. By 1868 the Democrats attempted to nominate Hancock for President, but failed. There were attempts to nominate him again in 1876, but it was not until 1880 that he finally received the nomination. Less than 2,000 votes separated him from Garfield.

While the popular vote was the closest in history, the Electoral College was much more in Garfield’s favor. He remained in the Army continuing to serve as the senior officer for the rest of his life. He lived another six years and died in 1886 suffering from complications of diabetes.
© History In Full Color
User Agreement
Cancel
Continue