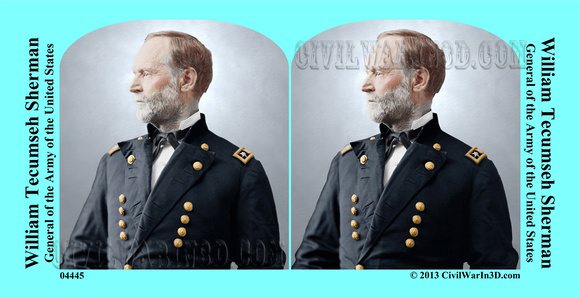 Born in Ohio in 1820 his father was a successful lawyer and member of the Ohio Supreme Court. When his father died suddenly when Sherman was nine he left his widow with eleven children to support. A friend of Sherman’s father, Thomas Ewing, who would go on to be first a U.S. Senator and then Secretary of the Treasury and the first Secretary of the Interior, agreed to take Sherman into his home. At the age of 16 he helped get Sherman into West Point to begin his military career.

At 20 years old he graduated and was commissioned in the Army. Unlike most of his contemporaries he did not participate in the Mexican American War, but spent most of his time performing administrative duties in California arriving just ahead of the California gold rush. Married in 1850 to the daughter of the man that raised him he soon tired of the Army and resigned in 1853 to work in San Francisco as a bank manager. After the bank’s failure in 1857 he unsuccessfully tried law before becoming superintendent of what is now Louisiana State University.

Sherman returned to the Army as a Colonel in May of 1861. Wounded during First Bull Run (First Manassas) he impressed Lincoln and was promoted to Brigadier General. Assigned to the Western theatre he soon suffered a mental breakdown and asked to be relieved of command by November. By mid-December he was back in command of some rear-echelon troops working alongside of General Grant. Within months he proved his worth at the Battle of Shilo and was wounded again promoted to Major General in May of 1862. Grant who was suffering his own demons in the form of General Halleck was persuaded by Sherman to stay.

The success and partnership in battle of these two men formed a continual streak of victories that ended with Sherman’s march to the sea and later capture of Columbia, South Carolina. Following the war Sherman was promoted to Lieutenant General and when Grant became President he was promoted to General of the Army. During a speech to the graduating class of Michigan Military Academy he said” "There is many a boy here today who looks on war as all glory, but, boys, it is all hell." Retired from the Army in 1884 he was quickly considered as a Presidential candidate. He declined by saying: "I will not accept if nominated and will not serve if elected." Sherman died in 1891 at the age of 71 and is buried in St. Louis.
© History In Full Color
User Agreement
Cancel
Continue