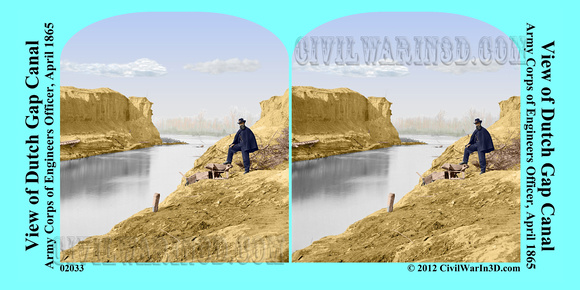 In June of 1864, Confederate Gen P.T. Beauregard had "bottled up" Union Gen Benjamin Butler's army behind fortifications across the Bermuda Hundred peninsula. To bust out of the "bottle", Butler decided to build a canal at Dutch Gap on the James River.

The proposed canal would bypass Batteries Dantzler, Wood and Semmes on the James River. It would also shortened the distance to Richmond by five miles. The downside? The Confederates would rain ammunition on the canal as it was being built.

The project was surveyed on the 7th of August, and three days later work began. Brigadier-General B. C. Ludlow, of General Butler's staff, acted as superintendent, assisted by Major Peter S. Michie, Chief Of Engineers.

The canal was an extremely dangerous job site. During construction, seven thousand shells were thrown in and around the canal; fifty men were killed there, and two hundred wounded; forty-five horses were killed, three barges sunk, and nine tugs disabled.

Whereas the canal was finished too late for use by the US military during the war, it is currently used by all shipping on the James River. Today, ocean-going ships serving the Port of Richmond carry over 500,000 tons of cargo yearly to northern Europe, the Caribbean and Canada.
© History In Full Color
User Agreement
Cancel
Continue