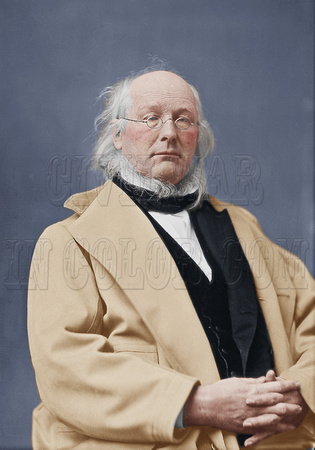 Horace Greeley was one of the most interesting and eccentric figures in American history. Even in appearance Greeley sparked comment; he wore a full length coat on even the hottest days and always carried a bright umbrella.


As the founder & editor of the most influential US newspaper from the 1840's to the 1870s, the New York Tribune, he was involved in almost every political and social issue of his era, ranging from election reform to spiritualism and phrenology.


On August 19, 1862, Horace Greeley, wrote an open letter to Lincoln to free the slaves to weaken the Confederacy. The editorial called, "The Prayer of Twenty Millions", resulted in one of Abraham Lincoln's most famous letters. Lincoln states, "My paramount object in this struggle is to save the Union, and is not either to save or to destroy slavery." His response was a classic statement of Lincoln's constitutional responsibilities & prepared the public for the announcement of the Emancipation Proclamation on September 22, 1862.