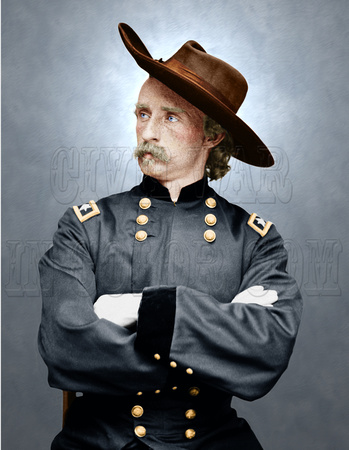 "Our boy-general never says, 'Go in men!' HE says, with that whoop and yell of his, 'Come on boys!' and in we go, you bet," a proud veteran wrote.

On July 3, 1863, Confederate Gen. Lee decided it was time to change tactics. After two days of fighting at the Battle of Gettysburg, PA, Lee decided to replicate his victory at Chancellorsville, VA by attacking from behind the Union army. First he would send his troops up Cemetery Ridge, in what became known as Pickett's Charge. Meanwhile, Confederate Gen. J.E.B. Stuart's cavalry would attack the Union's "rear area", forcing the Federals into diverting troops.

In position, Stuart fired a signal in each direction of the compass. Standing in Stuart's way was the youngest Civil War general - George Armstrong Custer, who led every charge. The newly minted General's men were armed with Spencer repeating rifles, determination and led by a general who, by having at least five horses shot out from under him, lived up to his reputation for courage.

According to Custer, "I at once ordered the First to charge ... Upon receiving the order to charge Colonel Town, placing himself at the head of his command, ordered the 'trot' and sabres to be drawn. In this manner this gallant body of men advanced to the attack ... Arriving within a few yards of the enemy's column, the charge was ordered, and with a yell that spread terror before them, the First Michigan cavalry, led by Colonel Town, rode upon the front rank of the enemy, sabring all who came within reach."

During the melee, the company's standard bearer was shot. "To save it, I was compelled to tear it from its staff and place it in my bosom." wrote Custer.

Despite their valiant efforts, the Confederates, whose “saber blades dazzled in the sun,” were about to break through the federal lines. Custer ordered a second cavalry charge.

“As the two columns approached each other the pace of each increased, when suddenly a crash, like the falling of timber, betokened the crisis. So sudden and violent was the collision that many of the horses were turned end over end and crushed their riders beneath them.”

Custer's charge broke Stuart's advance, ruined Lee's plan, brought him to the attention of the Army's brass and won the loyalty of his men.
© History In Full Color
User Agreement
Cancel
Continue