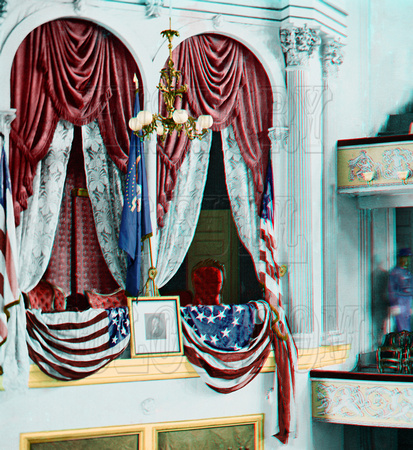 
Here, Lincoln was assassinated on April 14, 1865. In the Box, Lincoln & his wife Mary were seated on the right with Henry Rathbone & his fiancé Clara Harris seated on the left. It was decorated in honor of Lincoln's twelfth visit, to see a performance of Our American Cousin, starring Laura Keene. Proprietor John Ford had a rocking chair, now referred to as the "Lincoln Chair", moved into the Box for Lincoln's comfort.


Lincoln had attended performances at the Theatre as early as 1862. It was at Ford's that Lincoln saw, The Marble Heart, starring a then 24-year-old John Wilkes Booth.


John Ford's brother, James, was in charge of the theatre on Friday, April 14th, 1865. Unfortunately, during intermission, Lincoln’s bodyguard went into the lobby bar for a drink. He doesn't return for the start of Act 3. John Wilkes Booth, however, arrives at the theatre during the beginning of Act 3.


After the assassination, the Theatre was closed as a place of amusement. In the 1960's a movement was made to restore the theatre as it would have been in Lincoln's time. It was reopened on January 30, 1968 with a gala performance with Helen Hayes, Henry Fonda and other celebrities. Ford's Theatre was named a National Historic Site on June 23, 1970. Today, it has returned to a working theatre that honors both its acting heritage as well as its place in history.
© History In Full Color
User Agreement
Cancel
Continue