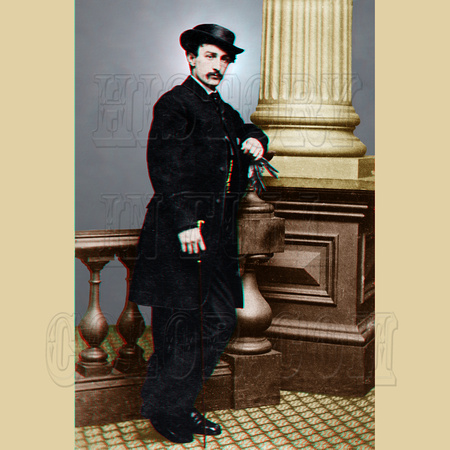 
John Wilkes Booth, at the start of the war, was just a few months shy of his 23rd birthday. Born in Maryland in 1838, he was the 9th of 10 children. Booth followed his father and brothers onto the stage. He began earning a living at acting by the age of 17. He was successful; earning more than $20,000 per year by the start of the war. He was considered perhaps not as talented as his brothers, but was immensely popular due to his charm and good looks.


Booth believed by causing the death of the President, along with the two officials next in line of succession, he would overcome his self-stigmatized role of coward and the South would take advantage of the ensuing chaos to rise up again. In the end, however, only he succeeded in killing his target. Seward was severely wounded but survived and the attack on Johnson was abandoned. Booth managed to escape. He became the focus of the largest manhunt in U.S. history until he was killed on April 26th, just 11 days after Lincoln. While much admired in the South today for his courage, he was shunned and hated at the time, for fear of Northern retribution.
© History In Full Color
User Agreement
Cancel
Continue