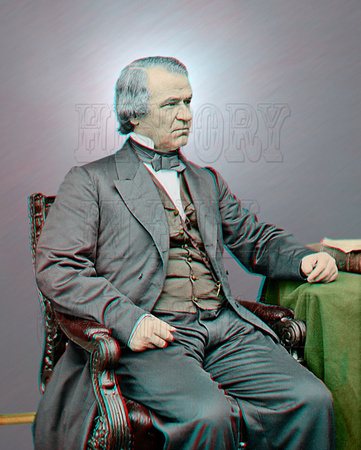 
Born at the end of 1808, Andrew Johnson was just a few weeks older than Abraham Lincoln. His father’s death, when he was three, left his family in deep poverty. Johnson's mother took in work spinning and weaving. Without any education and little prospects, his mother arranged for him to be an apprentice to a tailor. Around the age of 16, he decided to leave his apprenticeship. Along with his brother, he ran away from North Carolina to Tennessee. As he had been legally bound as an apprentice, his former master brought legal proceedings to force his return, but failed. Finally on his own, Johnson began working as a tailor. At the age of 18, he married Eliza McCardle, the 16 year old daughter of a shoemaker.


Without having any education, Johnson taught himself to read and write. After their marriage Eliza began tutoring him in math and worked to improve his written skills as well. He began participating in debates and was elected alderman at the age of 21. Four years later he was elected mayor and then in 1835 to the Tennessee House of Representatives as a Democrat. After a defeat, he was elected again to the state house in 1839 and then to the state Senate in 1841. He entered national office in 1843, as a member of congress and served five terms until he was elected Governor of Tennessee. After one term as Governor, he was elected to the U.S. Senate and served from 1857 to 1862.


Politically, Johnson was a bit of an odd mix. He was pro-slavery on the basis that it was guaranteed (he believed) by the Constitution. At the same time he believed in the preservation of the Union. He opposed anti-slavery measures while at the same time campaigning in Tennessee against secession. With that background, the Tennessee delegation nominated him for the Democratic nomination for President. Failing to gain support from other delegates, he was defeated and continued a vigorous campaign against secession.


When Tennessee did secede in June of 1861, Johnson became the only U.S. Senator from a Southern state not to resign. This also left him as a man without a state. With Tennessee the last to leave the Union, it was also one of the first places that the saw Union victories. With the capture of Memphis and Nashville, the Union controlled the western half of the state and Lincoln appointed Johnson as Military Governor in 1862.


With the election of 1864 approaching it was not clear that Lincoln would win. The country had tired of war, the staggering loss of life as well as financial cost. Grant had fought Lee to a stalemate near Petersburg and a siege had been in place for months, further demoralizing the chances of re-election. The Democrats had nominated the very popular General McClellan on a “peace” platform that promised to effectively end the war with a truce. Concerned that all was lost, the Republicans decided to reach out to the “War” Democrats who had supported Lincoln and opposed the Confederacy. Johnson was the obvious candidate since he was a Southern Democrat who had opposed secession. To further appease Democrats who would not vote for a Republican (even Lincoln) the party name was changed to the National Union Party.

This is the only incidence that a major party has nominated a Vice President from the opposite party. Under this banner (and with help from Sherman’s march to the sea) Lincoln was easily elected along with Johnson.


Johnson's time as Vice President was very short. Just 43 days after taking the oath of Vice President, he was sworn in as President to replace Lincoln. While he took the path of leniency with the South that had been advocated by Lincoln, it is unclear what the response would have been to Lincoln had he survived to lead the reconstruction. Many in Congress and in the North felt that with a Southern Democrat suddenly in the White House, that Johnson was too soft on the South.


With Northern Republicans opposed, and without Southern Democrats to support him, Johnson fought a losing battle with Congress. In 1867 Congress passed the “Tenure of Office” act, which essentially required that the President must seek the approval of congress before requesting resignation of a cabinet member. Basically, if the president must have approval of Congress to appoint a cabinet member, then he must also have approval to fire him.


Subsequently, when Johnson requested Secretary of War, Edwin Stanton, to resign, he violated the "Tenure of Office" act. This setup an opportunity for impeachment. The House quickly impeached him and the case moved to the Senate. Impeachment did not require the simple majority of the Senate, but two thirds approval. With a vote of 35 opposing and 19 supporting, Johnson remained in office by a single vote.

Despite winning the vote, Johnson's presidency was over. While he had about 10 months in office remaining, it was clear that he had lost all support as President.


Afterwards, Johnson became the first sitting President to run for Senate, but lost. Four years later he also lost an attempt to return to the House. Finally in 1874 he was once again elected to the Senate and took the oath in 1875. Johnson became the only former President to be elected to the Senate. However, his time in the Senate would not last. Less than five months after taking office Johnson suffered a stroke and died. According to his wishes, he was wrapped in an American flag and a copy of the Constitution was placed under his head.
© History In Full Color
User Agreement
Cancel
Continue