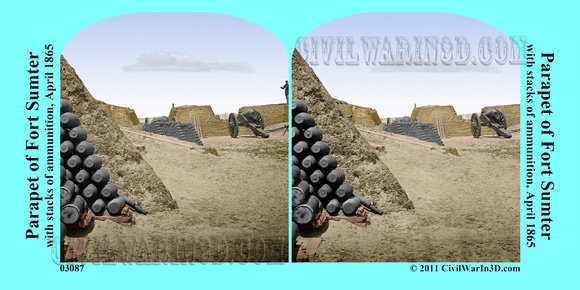 "We had but one gun to burst in March [1864], the 30-pounder Parrott at Putnam, which was used to fire upon Charleston. It 'gave up the ghost' at the 4,615th round, a remarkable number of shots to be fired from a single piece of ordnance." COL W. W. H. Davis

On September 7, 1863, the Union captured Batteries Wagner and Gregg on Morris Island in Charleston Harbor, SC. The Confederates built Battery Gregg to face the Federal threat from the south. The Federals "turned" the works to bombard Fort Sumter with siege guns.

As part of the modification process, Battery Gregg was renamed to honor of COL Haldimand Putnam, killed in the second assault on Battery Wagner on July 18, 1863.

Stacked in the foreground are shells with metal rims made soft to take the grooves of the rifling from the heavy caliber siege guns.
© History In Full Color
User Agreement
Cancel
Continue