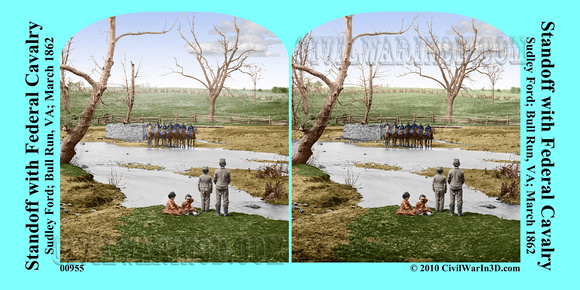 It is probable that the Thornberry children, who lived just up the hill from Sudley Springs Ford, that appear in this picture. Samuel was 12 in 1860; his brother Joseph, 7, toddler Annetta, and Laura, 5.

After First Manassas (First Bull Run), the Confederates held the field for several months before the Union Army was able to enter. This image was taken approximately eight months after the first battle and about five months before the second. While it is not certain who either the children or cavalry are, it is clear that the children do not fear their opponents. After all, the South had been victorious on this battlefield, and soon would again. The boys wore Confederate uniforms tailored for their sized. The girls appear to be wearing matching handmade dresses. Perhaps they are four siblings “scouting” the enemy.

It was during the First Manassas that “Stonewall” Jackson received his nickname and General Beauregard was promoted for his victory by Jefferson Davis. On the Union side, General McDowell was held accountable and was soon replaced by General McClellan. With the battlefield being only twenty five miles from Washington D.C. and about 10 miles from modern day Dulles airport, the concern was that the South would stage a campaign on the capital, which was nearly defenseless.

Professor Lowe went up in a balloon and was able to report that no such massing was occurring. Both sides realized that the war would last much longer than either expected. Three days after the battle President Lincoln called for more than half a million troops, with enlistments of three years, versus the previous ninety days.
© History In Full Color
User Agreement
Cancel
Continue